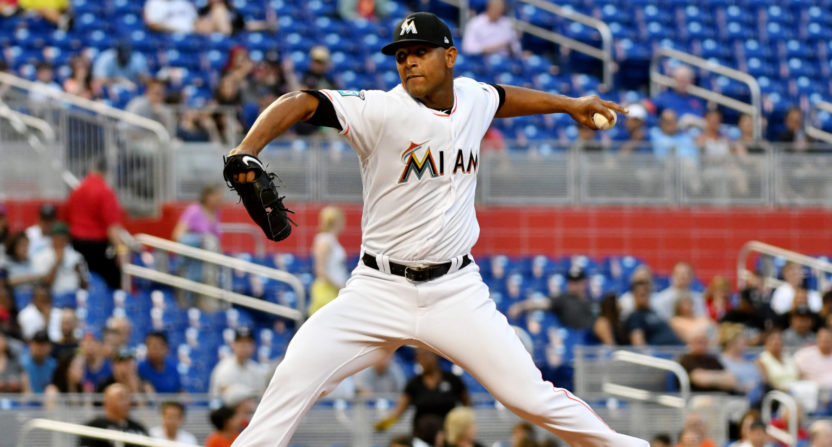 Marlins pitcher Jarlin Garcia made his first career major-league start Wednesday night, and it could not have gone much better. The 25-year-old lefty shut down the Mets over six innings — walking two, striking out three and allowing a big fat zero in the hits column.

So it came as a surprise to most observers when the seventh inning started with reliever Drew Steckenrider on the mound and Garcia in the dugout, having been lifted from the game after only 77 pitches.

Jarlin Garcia of the @Marlins gets pulled from his 1st career start after 6 innings pitched and no hits allowed.

The last MLB no-hitter also came from the Marlins, by Edinson Vólquez last June against the Diamondbacks pic.twitter.com/gV6aLyWiBf

Now, there are plenty of reasonable arguments for why Marlins manager Don Mattingly was right to pull Garcia, no-no be damned. The lefty was starting his first game at any level since 2016, so he was likely not fully stretched out. The Marlins would hate to injure a promising young pitcher in a no-hit bid that ultimately doesn’t mean much. Plus, Garcia was going to have a hard time finishing the game even if Mattingly left him in for the seventh, given his pitch-count through six and the team’s likely hesitance to let him go too far over 100 tosses under any circumstance. And since the Marlins were leading only 1-0 at the time Garcia was pulled, the decision was likely motivated in part by a desire to, you know, win the game.

But despite all that… come on, it’s a no-hitter! The Marlins came into the season with expectations in the basement and are off to an awful start. It’s going to be a long summer for this team, with few highlights to celebrate. Why not let Garcia go for it, at least for another inning? Give the fans something to cheer and the players something to rally around.

As it turned out, the baseball gods punished Mattingly and the Marlins for pulling Garcia. In the eighth inning, with the score still 1-0, Tayron Guerrero, Chris O’Grady and Junichi Tazawa combined to allow four runs. The Mets sealed the game and wound up winning 4-1, as Garcia walked away with an impressive but unsatisfying no-decision.