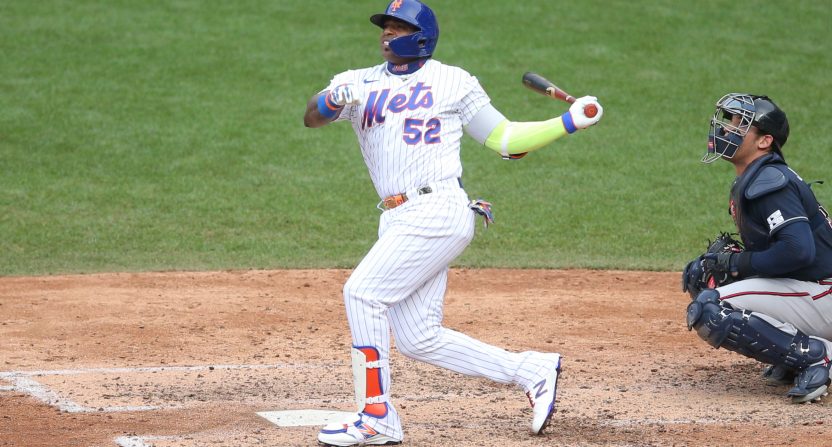 The Mets blew a game in typical fashion for the franchise Friday night, giving up five runs in the 8th inning and losing 11-10 to the Braves. Today’s Mets story, though, has the potential to be a lot more serious.

The team announced Sunday that they don’t know where Yoenis Cespedes is, nor have they been able to contact him at all.

BREAKING: The Mets don't know where Yoenis Cespedes is.

Team statement: "As of game time, Yoenis Céspedes has not reported to the ballpark today. He did not reach out to management with any explanation for his absence. Our attempts to contact him have been unsuccessful."

Team is looking into this, obviously. Checked or will check his hotel room, make every effort to locate. They did this when Matt Harvey went missing, too, sending security to his house.

Listen, there are plenty of jokes to be made if/when Cespedes is found safely, but until then, if the situation is truly unknown, that’s terrifying. The idea that the Mets would announce this WITHOUT actually having made these checks is also impossibly irresponsible. It’s like they don’t remember Darryl Kile, or even Tyler Skaggs just last year.

Releasing a statement that you don’t know where a player is, is so bizarre to me.

You’d think they would do everything to find him first for like 24 hours and just say something like, “can’t comment on that” when asked about it.

There was this update:

If the Mets had no reason to believe safety was at risk, one could reasomably assume that the earlier statement was sent with intent to shame Yoenis Cespedes. https://t.co/E7oNmTHg6Y

Though again, if they truly haven’t been able to locate or reach him, it would seem like they equally have no reason to believe his safety ISN’T at risk.

Hopefully this ends as well as it can, with all of us just ripping the Mets for possibly doing something that could have been tone deaf if things had ended in a worse way.

That best-case scenario: Cespedes decided to opt-out from playing (which would be understandable given how poorly MLB has handled the return to playing amidst the Covid-19 pandemic), and did a poor job communicating that to the team. (Or the team did a poor job of receiving that communication.)

Update: Yoenis Cespedes has indeed chosen to opt out. The Mets didn’t find out about it until mid-game on Sunday, and don’t exactly sound thrilled.

When Yoenis Cespedes didn't show up today, the Mets sent security to his room. They found it empty. He had taken his belongings, just up and left, and through his agent informed the team mid-game that he was opting out, according to Mets GM Brodie Van Wagenen.