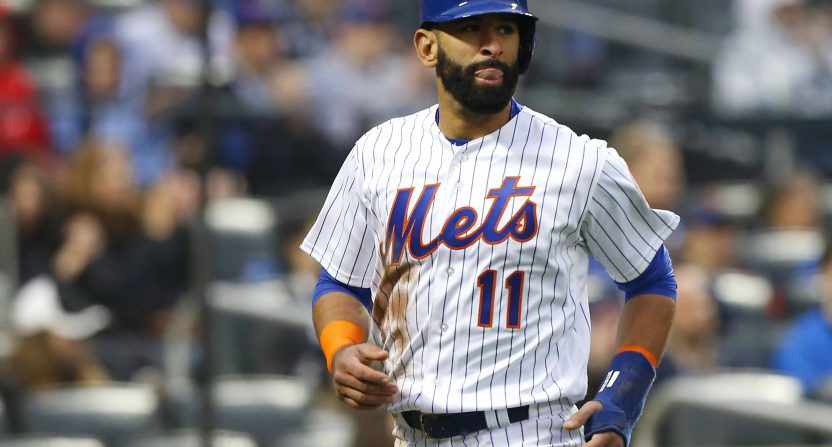 No one loves washed up veterans like the New York Mets.

Not only did the Mets sign 37-year-old outfielder Jose Bautista to a one-year major-league contract Tuesday, extending the career of a former All-Star whose run appeared decidedly over, they also slotted the diminished slugger in left field for their game against the Marlins.

This signing is… baffling, to say the least. Bautista was released by the Braves on Sunday after hitting .143/.240/.343 in 40 plate appearances this year. That lackluster performance came a season after Bautista batted .203/.308/.366 during his Toronto swan song in 2017. All evidence suggests he’s entirely cooked.

The Mets, meanwhile, are not exactly desperate for an outfielder. Even with Juan Lagares out for the year and Yoenis Cespedes on the disabled list, New York has Jay Bruce, Michael Conforto and Brandon Nimmo, with Ezequiel Carrera at Triple-A. Carrera is far better and more versatile defensively than Bautista and was a significantly better hitter than his Blue Jays teammate last year as well. Overall, he seems like a clearly superior option (despite poor stats at Triple-A).

The only explanation, therefore, is that the Mets just desperately love old guys, particularly old position players. After all, they kept Jose Reyes and Asdrubal Cabrera around last season and this one, while signing Bruce to block Nimmo and Adrian Gonzalez to block Dom Smith. It’s a strange phenomenon, one that dates back at least to last decade, when they acquired Jeromy Burnitz, Mo Vaughn, Moises Alou and a cast of other faded stars over a period of just a few years. Just check out this list:

Why do they keep doing this? Do they deeply value veteran presence? Do they truly believe they can turn around these waning careers? Do you they think veterans drive ticket sales? Do they distrust young players? Do they feel like they have no other choice? We may never know.

Bautista’s Mets career got off to a strong start Tuesday night, when the outfielder doubled in the second inning and scored two batters later on a sacrifice fly. But Bautista followed up that hit with a strikeout in fourth and another in the seventh, in what seemed to be a more accurate omen for his future in Queens.