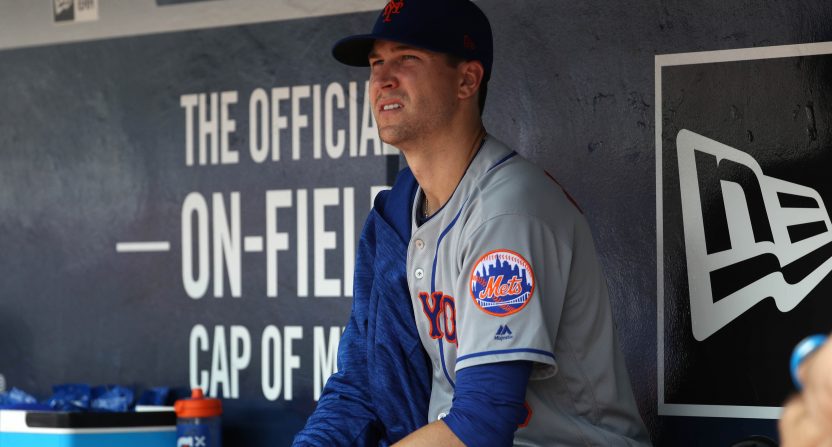 The loss continued a run of excellence for deGrom and futility for the Mets offense that truly defies belief. deGrom leads the National League with a 1.55 ERA, yet he has only four wins on the season. Why? Because over his past 10 starts, as he has pitched like the second coming of Bob Gibson, the team around him has played like the second coming of the 1899 Cleveland Spiders.

Needless to say, the situation lends itself to ridiculous fun facts.

Assuming the Mets don't come back in the 9th, Jacob deGrom will be the first pitcher since Randy Johnson of the 1999 D-backs to make 5 straight starts of 7+ IP and ≤ 2 ER, and see his team lose each one.

The Mets .357 win pct in Jacob deGrom's starts is the 12th-lowest team win pct for any qualified pitcher.

And the craziest one of all…

Today was the 7th time this season Jacob deGrom has allowed 1 or fewer runs and his team lost.

So basically, the Mets are letting down deGrom in ways not seen since the Grover Cleveland administration, turning one of the very best pitchers in baseball into a dude who wins at the rate of a Triple-A call-up.

But the Mets have not saved their suckiness for deGrom starts exclusively. The team’s offense has been awful no matter who is on the mound, as demonstrated by this nearly unfathomable stat:

The Mets made history! pic.twitter.com/x1AweLBV6v

Yep, the Mets are on a streak of offensive ineptitude no one walking this earth has ever seen.

Looking up and down the Mets’ lineup, it’s hard to figure how the team could possibly be this incapable of scoring runs. Between Jay Bruce, Michael Conforto, Todd Frazier, Asdrubal Cabrera and Brandon Nimmo, there are good hitters on this team — they just haven’t performed. And yes, eventually this group will likely turn things around to some extent, but by that point the 28-36 Mets might be out of the race for good and Jacob deGrom might have some gray hairs.