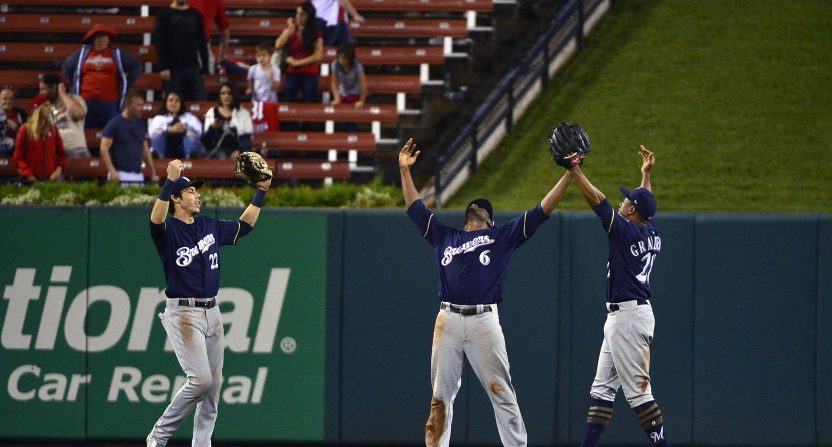 We’re less than a week from the National League Wild Card playoff game, and we have no idea who will be playing in it.

Hell, we only know one NL team that’s going to be in the playoffs – the NL East champion Braves, who clinched their first division crown on Saturday. That comes in stark contrast to the American League, where we know all five playoff teams, and who will be playing who in the ALDS – all we don’t know is where the Wild Card game will be played, in either Oakland or The Bronx.-

Compared to the American League, the National League is a complete disaster, and it’s beautiful.

But the margins in those three races are incredibly tight.

There are five NL teams fighting for four spots. But each of those five teams could miss the playoffs or clinch the best record in the National League with just four or five games left (depending on the team) in the season.

Here’s how it breaks down with the five remaining teams.

Chicago Cubs: the Cubs can clinch a playoff spot with just one more win, or one loss by the Cardinals. Chicago has two games left with the Pirates this week, and closes with three against (hey, what do you know) the Cardinals.

Milwaukee Brewers: the Brewers can also clinch a playoff spot with just one more win, or one loss by the Cardinals. They have one game left with St. Louis this week, and close with three against the hapless Detroit Tigers.

St. Louis Cardinals: the Cardinals don’t control their own destiny, even with three games against the Cubs to close the year. If they win out and both the Brewers and Cubs lose out, we’ll be looking at a three-way tie for the NL Central crown – and for at least one of the Wild Card spots.

Los Angeles Dodgers: the Dodgers also don’t control their own destiny. If they win out, they’ll finish with 92 wins, the same total the Rockies can have if they win out. They finish with one more game against the Diamondbacks and three against their west coast blood rival, the San Francisco Giants.

Colorado Rockies: Colorado has two left with the Phillies and three with the Nationals, all at home. They need to have at least one more win than the Dodgers over the final week to push themselves into a tie (or better) for the NL West title, and need to at least match the Cardinals’ win total over the final week to guarantee themselves a one game playoff for one of the NL’s two Wild Card berths.

Somewhat incredibly, the possibility of a five-way tie still exists.

If the Cubs and Brewers both lose out (to the Pirates and Cardinals, and Cardinals and Tigers, respectively), they’ll both finish at 91-71.

If the Cardinals win out against the Brewers and Cubs, they’ll finish 91-71.

Does your head hurt yet? Good, it should. If the Rockies and Dodgers tie for the NL West crown, they’ll play a tiebreaker on Monday in Los Angeles with the winner taking the division title. If there’s a three-way tie for the NL Central title, we would get a pair of tiebreaker games for the division title – team A would host team B on Monday, and the winner of that game would host team C on Tuesday. Whoever wins the Tuesday game would take the division. That would give us a three-way tie for the two Wild Cards, and we’d do the same team A/B/C shit all over again.

(at least, that’s what I think. I blacked out while writing up these tiebreakers)

If you want the least complicated situation (and I have no idea why you would want that), you should cheer for the Brewers to beat the Cardinals on Wednesday, which would clinch playoff spots for both the Cubs and Brewers. That would leave three teams for two spots (instead of five for four), and if the Dodgers and Rockies could simply take care of business and outplay the Cardinals, they would make the playoffs and St. Louis would stay at home.

No matter what ends up happening in the National League, I think the Atlanta Braves are in the catbird’s seat. Atlanta hasn’t even guaranteed themselves homefield in the NLDS yet, but they don’t have to play for their lives this week like the other five National League teams. They know they’ll have Mike Foltynewicz going in Game 1 of the NLDS, and that he won’t be needed on Sunday, or Monday, or Tuesday to save the Braves’ season. Imagine if, after burning Clayton Kershaw on Saturday and Walker Buehler on Sunday, the Dodgers have to burn another starter on Monday and/or Tuesday. That would put them even more behind the eight-ball if they advanced to the NLDS, while the Braves are sitting there (assuming the Dodgers won the division), rested and waiting.

The season might be in its final days, but there is still plenty of drama left.