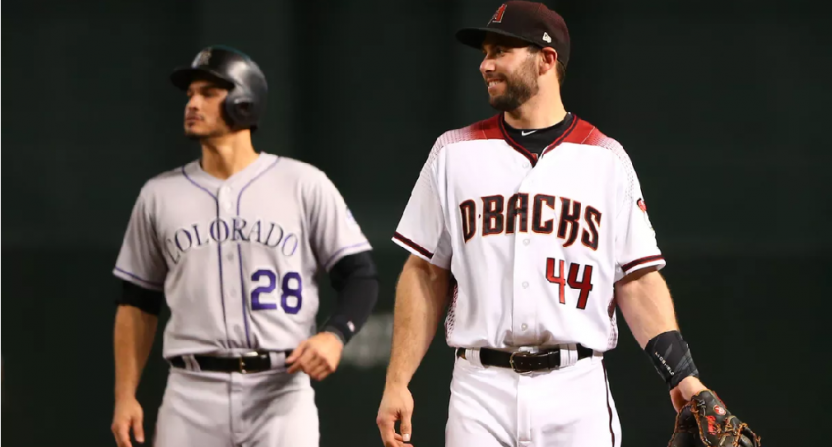 In the American League, we already have a pretty good idea of what teams are making the postseason.

The AL West is still up for grabs, with the surging Oakland A’s just one game back of the defending champion Houston Astros, and the Seattle Mariners are still in the picture at 4.5 games back. In the Wild Card race, the New York Yankees have a four-game lead for the top slot, and the A’s are up 3.5 games for the second slot. But we know that — barring a miracle — the Boston Red Sox will win the AL East (9.5-game lead on the Yankees), the Cleveland Indians will win the AL Central (12-game lead on the Twins), and three of the Astros, A’s, Yankees, and Mariners will be in the playoffs.

The National League, on the other hand, is absolutely bananas. Let’s take a look at the NL postseason picture…

The races in all three NL divisions look like they could go down to the wire.

The Washington Nationals entered the season as huge favorites in the NL East, and have been very disappointing, to put it nicely (Deadspin’s Chris Thompson didn’t put it as nicely). Washington (62-63) sits seven games behind the division-leading Atlanta Braves (68-55).

The Braves have “arrived a year early,” just like the second-place Philadelphia Phillies have. The Phillies are just a half game behind the Braves.

Both teams had a chance to create some separation in recent days, but the Braves got swept in a four-game series at home vs the Colorado Rockies, and the Phillies lost three of five to the lowly New York Mets.

In the NL Central, the Milwaukee Brewers (69-57) were in first place for most of the season, but the favored Chicago Cubs (71-52) finally overtook them in recent weeks. The Cubs have a 3.5-game lead on Milwaukee, but the red-hot St. Louis Cardinals (68-57) are back in the mix now after an eight-game winning streak that was followed by winning two of three games against the Brewers over the weekend.

Chicago is dealing with injuries to 2016 NL MVP Kris Bryant, starting pitcher Yu Darvish, and closer Brandon Morrow. Their starting rotation has also been an issue all season (though trade deadline acquisition Cole Hamels has been terrific), and the offense has slumped since the All-Star break, so holding off two teams within four games will be a challenge.

And the NL West figures to be the most entertaining division race.

But these teams have under 40 games left on the schedule. We’re at the point of the season where luck and how legitimate a team’s record seems doesn’t really matter. The Dodgers are in reality the best team in the division, but they have to be 2-3 games better than the Diamondbacks and Rockies the rest of the way, with under 40 games left to work with. That could easily not happen.

Currently, the Phillies, Brewers, and Rockies are all tied for the two Wild Card slots. The Cardinals are just a half game back, and the Dodgers are 1.5 back. That’s five teams within 1.5 games. If we then add in the first-place Braves and D-Backs (as they could easily fall out of the division lead and be a part of the Wild Card shenanigans), we’re talking seven teams within two games of each other.

Right now, there is a three-way tie for the two NL wild-card spots among Philadelphia, Milwaukee and Colorado, with St. Louis a half-game back and LA 1.5 behind. Add in division-leading Arizona and Atlanta, and there are seven NL teams within two games of each other. Chaos rules.

We also can’t completely rule out the Pittsburgh Pirates (5.5 games back), Washington Nationals (6.5 games back), and San Francisco Giants (7.5 games back), but making up that much ground on *several* teams is obviously quite unlikely.

What the projections think

Let’s immediately note: the computers have been down on teams like the Brewers, Rockies, Diamondbacks, Braves, and Phillies all season. And again, we’re so deep into the season that a team’s true talent or luck doesn’t matter as much; 67+ wins have already been banked for the main contenders and there’s not much season left.

FanGraphs currently has the Phillies with the most projected wins at 87.4, and gives Philadelphia a 51.3% chance to win the division. The Braves are right behind at being projected for 86.7 wins, and 40.0% division title odds.

The Nats are projected for 83.2 wins (8.7% NL East odds) and have the highest projected winning percentage for the rest of the season in the NL East, at .572. The computers care not for narratives, momentum, and turmoil. The computers see true talent and years of data on highly talented players, which the Nats have many of. But we can all see the Nats’ mess with our own eyes and it seems hard to imagine them playing excellent baseball in the final weeks.

So, basically the Braves and Phillies are reversed on the two sites, which tells you all you need to know about how close this all is on paper. It’s essentially a coin flip.

FanGraphs has the Cubs at 93.2 wins, with 85.4% chances to win the NL Central for the third straight year. The Cubs are also given 97.1% chances to reach the playoffs, which is 18% higher than any other NL team’s playoff odds. Now, if Yu Darvish is done for the season (as there would seem to be a good chance of), the Cubs’ numbers in these projections would take a little bit of a hit, but the team would remain division favorites. The Cubs have their issues right now, but the FanGraphs odds aren’t too surprising when you consider Chicago has a five-game lead in the loss column and the most talented roster in the division.

The Brewers are projected for 87.4 wins on FanGraphs and given 8.7% division title chances, followed by the Cardinals at 86.4 wins and 5.6% chances to win the Central.

Five Thirty Eight agrees with FanGraphs on the Cubs, projecting Chicago for 93 wins. And they give the Cubs a 93% shot at winning the division. Five Thirty Eight likes the Brewers and Cardinals a bit more than FanGraphs does, with an 88-win projection for both teams. The Brewers are given a 13% NL Central crown chance, while the Cardinals are at 12%.

Despite being in third place, the Dodgers remain the team to beat in the NL West according to FanGraphs. The Dodgers are projected for 89.4 wins and are given a 55.4% chance to win the NL West.  FanGraphs has the Dodgers putting together an NL-best .606 winning percentage in the remaining games.

The D-Backs have an 87.3-win projection on FanGraphs with 25.2% division title odds, and the Rockies are at 86.7 wins with an 18.8% shot. Both teams are projected to play under .500 baseball the rest of the way, so the FanGraphs system clearly hasn’t changed very much in how they view these teams, despite the success.

Five Thirty Eight is buying the D-Backs and Rockies more, with Arizona projected for 89 wins and the Rockies projected to tie the Dodgers in second place at 88 wins. Like the NL East, the projection systems are split on the NL West.

For this, we’ll remove the teams FanGraphs has winning the divisions. That means the Cubs, Dodgers, and Phillies aren’t a part of the Wild Card race.

At Five Thirty Eight, we’ll remove their division winners: the Cubs, D-Backs, and Braves. And then we have a total circus.

The Brewers, Cardinals, Dodgers, and Rockies are all projected for 88 wins. The Phillies are right behind at 87 wins. We’d have a four-way tie for the two NL Wild Card slots, with the Phillies just one game back. And the Braves are projected to win the division with 88 wins. Five Thirty Eight thinks seven teams in the NL win between 87-89 games! Insane.

The NL playoff races are clearly going to make for a wild, wild ride in the coming weeks.