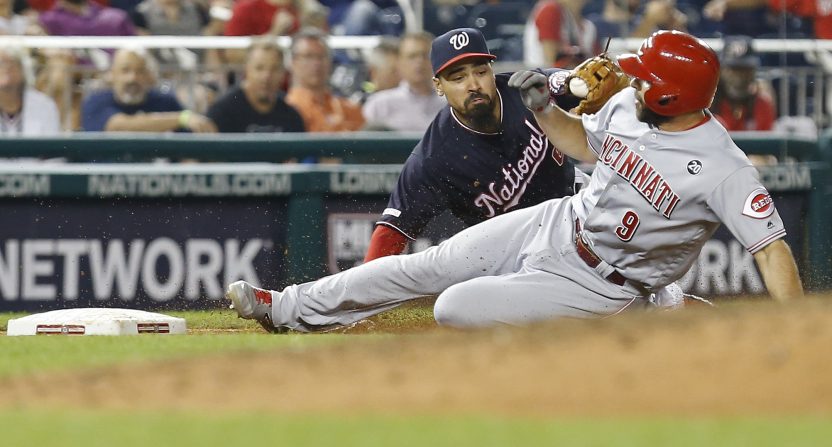 As the MLB season slogs through August, and contenders wait for October, a (sort of?) fierce battle rages among numerous National League Wild Card hopefuls. Eight teams are within five games of making that one-off playoff; three of them are NL Central clubs chasing the Cubs and the rest have little shot at catching the Dodgers and Braves.

It is an odd race. The Nationals, on a nice stretch of games at the moment, narrowly lead the race, and at some point should get Max Scherzer back from injury. They have one of the best rotations in baseball, and arguably were number one until the Astros pulled Zack Greinke out of a hat. The Anthony Rendon-Juan Soto-Trea Turner hitting core looks promising.

Behind them sit the Cardinals, who have seen Paul Goldschmidt return to star status after a middling start to the season. St. Louis aren’t far behind the Cubs in the NL Central, riding a perfectly fine bullpen to a mildly successful season. Kolton Wong has been a low-key plus; the Cardinals lead the league in wins above average out of second base.

St. Louis is mired in a dogfight with divisional rival Milwaukee and the surging Mets. It will be a struggle for the top two current teams to fend off the field — the Brewers, in spite of their horrendous bullpen, have Christian Yelich back from brief injury and the skeleton of a team that was supposed to be better this season, and the Mets are fresh off a winning streak, with Marcus Stroman in the fold.

The Phillies (also two back along with the Mets), Diamondbacks (2.5), Giants (3.5), and Reds (6.5) are bouncing around below. Compare this to the American League, where the second team back of the Wild Card teams (the Red Sox) is 8.5 games back. The NL’s race looks pretty weird though. It fits the general state of the league; teams that are conservative and obsessed with the future. This results in this group of middle class clubs that don’t seem to want to make a strong move in any direction.

No one ever wants to sign free agents, and the trade deadline was barren outside of the Astros’ Greinke trade and the three-team Trevor Bauer trade, in which the star pitcher went to 2020 hopefuls Cincinnati. Teams are content entering seasons thinking there’s at least a chance they contend, so they only try to improve if they actually make a run, the way the 2018 Brewers did. If they end up in the Wild Card race, they’ll scuttle along and hope they play better next season, counting on prospects and youth.

Even as the Astros, Dodgers, and Yankees state their claims as the clear top tier of the league, parity reigns in MLB. There is little urgency to take advantage of championship windows and superstars outside of a handful of elites. Teams are more likely to trade their 27-year-old stars for prospect value than they are to truly build around them.

Given the nature of baseball, that conservativism makes sense to an extent. Stars mean less in baseball than in basketball or football. Mike Trout, arguably the greatest player of all time at the age of 28, can attest. But even teams that have real cores have struggled to build on it. What about the Rockies, who have good hitters and yet got swept in the NLDS last year who now sit last in their division? They’ve been unable to build, or sustain the good starting pitching they produced last year.

The Pirates had a good team from 2013-2015, and then fell unceremoniously into baseball purgatory due solely to disastrous front office management and zero in-house development. Baseball lacks good management across the board. Teams are skidding along in the middle of the league, hoping they strike gold on prospects and magically become a good team. The handful of Astros copycats actively trying to lose are a whole other story.

Championship windows barely exist anymore, unless you’re the Dodgers, Astros, Yankees, and maybe the Red Sox, the group of elites that wants to win right away. Among the huge squadron of teams below them, mediocrity is an accepted reality.

And so the NL Wild Card race continues. It’s hard to figure out if anyone even wants to win it.