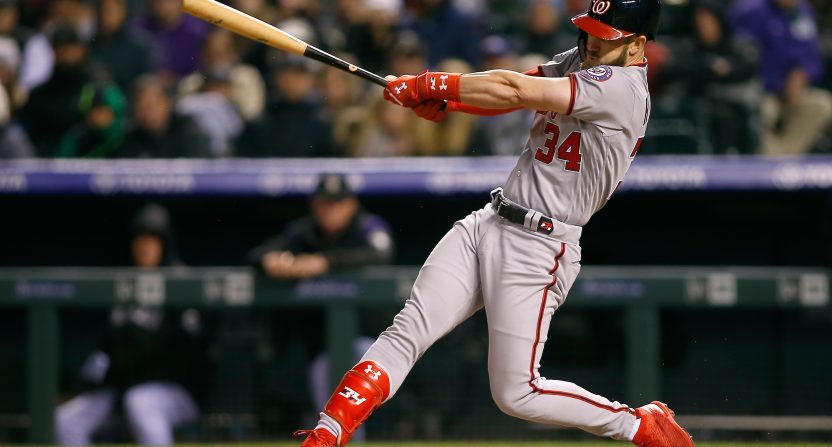 This week, it was reported by the Washington Post that the Washington Nationals made Bryce Harper an extension offer at the end of the season. Harper (of course) turned it down, and officially hit the free agent market earlier this month.

This morning, it was reported that the Nationals’ offer was for ten years and $300 million, which is one hell of an offer to decline.

Nationals’ offer to Bryce Harper was roughly $300 million for 10 years — so an AAV of $30 million — according to multiple people familiar with it. No opt outs.

That’s a shitload of money to leave on the table! It’s also a great offer from the Nationals, and it makes all the sense in the world for Harper to turn the extension offer down.

First off, Harper is going to get more than $300 million on the open market, so from a pure dollars and cents standpoint, it makes sense for him to walk away from the deal.

Secondly, Harper made it through the 2018 season unscathed (which for him is a big deal) and didn’t have a year that would depress his value. Sure, his .249 batting average isn’t ideal, and neither is his jarring -26 DRS, but as we all know, batting average isn’t the be all and end all of offensive statistics, and advanced defensive statistics can vary by the year. Harper still launched 34 dingers (the second-highest total in his career), walked at an 18.7% clip (the second-best mark in his career), scored 103 runs, and drove in 100.

Third, this was a great opening offer from the Nationals…that came at the end of September. They had to know that Harper and agent Scott Boras were going to have their sights set high, especially given his $21 million salary in 2018. If they came to Harper and Boras with this offer last December, or this March, or hell, even this June, maybe Harper and Boras would have at least considered the offer and used it to finalize a deal.

But making the offer in September? That’s just a ploy to save face, tell your fans that you tried, and feel good about inevitably losing Harper since you made him one of the largest contract offers in baseball history (which will still be lower than what he ends up receiving).

Washington is now in a difficult position. Harper has turned down a rich offer from the club, and now he can sign wherever the hell he wants. If the Nationals aren’t going to up their offer (which if they really wanted to, they would have made this offer to Harper months ago and worked their way up from there), they need to think about the post-Harper era and how their team will look. They can roll out an outfield of Juan Soto, Adam Eaton, and Victor Robles next year, which isn’t as sexy as an outfield with Harper in it, but could be almost as effective. Then, they can use the money they would have given to Harper to improve the team in other areas (back end of the rotation, bullpen) and still try to contend in 2019 without their franchise superstar in the fold.

I really thought earlier this year that Harper was going to remain in DC for the long haul. After this week’s news of Washington’s minimal attempts to actually re-sign him during the season, I now think he’s going to go elsewhere, and the Nationals will be moving on to another time in their franchise’s history.