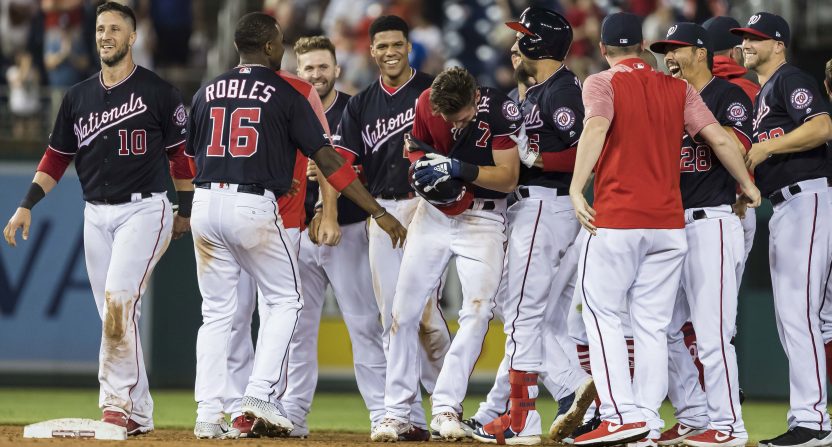 The Washington Nationals have quickly gone from MLB’s biggest disappointment in 2019, to MLB’s hottest team.

The Washington Nationals have been the best team in baseball since May 24. pic.twitter.com/Tq0PtJYr8w

This all comes after the Nats were absolutely terrible for nearly the first two months of the season. After May 23, the Nats were 19-31 and on a five-game losing streak (with four of those losses coming in a sweep by the clown show that is the Mets).

The turnaround isn’t exactly surprising, because the talent level was always there. This is a team that has Max Scherzer (blowing away the pitching competition in WAR), Anthony Rendon, Stephen Strasburg, Patrick Corbin, Juan Soto, and Sean Doolittle. Entering the season, FanGraphs viewed the Nats as the NL’s second-best team, projected for over 90 wins (and just a couple wins behind the Dodgers). Even after losing Bryce Harper over the offseason, this remains a loaded roster.

And the Nats’ turnaround could have a sizable impact on the league for reasons more than just the NL East and NL Wild Card races.

For one, the Nats were looking like one of the more attractive sellers on the trade market leading up to the July 31. Rendon — on pace for his third straight 6-WAR season, per FanGraphs — is a free agent at the end of the season, and would’ve been the best position player on the trade market. Howie Kendrick (.323/.376/.562) is a veteran bat many teams would’ve coveted. Doolittle could help anybody’s bullpen (and largely boost many bullpens), and even Scherzer’s name has come up in trade rumors. Now if the Nats do anything before the trade deadline, it’s probably as a buyer.

And the Nats would arguably be the biggest threat to the Dodgers on the NL side of things in the playoffs. If the Nats were to win the Wild Card Game and face the Dodgers (almost certainly the NL’s top seed) in the NLDS, that’s a five-game series where the Nats would likely get to throw Stephen Strasburg, Patrick Corbin, and Max Scherzer (surely the Wild Card Game starter) for four of a potential five games. The Dodgers are a juggernaut and absolutely the better baseball team, but facing pitching like that and in such a short series goes a long way to making things pretty close on paper.

The Nats aren’t just back in the playoff race after looking like a lost cause just a month ago- they’re very dangerous.