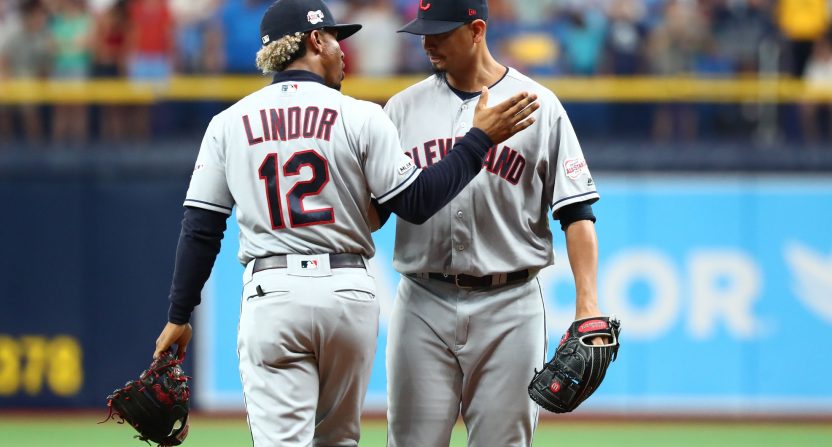 We could all use a sports-related distraction this week, and leave it to the New York Mets to provide that distraction.

On Thursday,  the Mets announced that they had acquired both Francisco Lindor and Carlos Carrasco from the Cleveland Indians.

Wolf was a second-round pick by the Mets in 2019, and Greene was a supplemental second round pick by the team in the 2020 Draft. Both rank inside the team’s top ten, per MLB Pipeline. Wolf turned 20 in September, while Greene turned 19 days earlier. Gimenez turned 22 around the same time, and hit .263/.333/.398 with three homers and eight stolen bases in 49 games during the 2020 season, his rookie year in the majors. Heading into the season, he was their #3 prospect, per Pipeline. Rosario has a career .268/.302/.403 line in the majors over 403 games with the Mets, serving as the team’s primary shortstop for the last three seasons.

Acquiring Lindor and Carrasco would be a win now move for Steve Cohen and the franchise. The 27-year old Lindor is a superstar, with a career .285/.346/.488 slash line in 777 games for Cleveland. He’s a four time All-Star, and has won two Gold Gloves and two Silver Sluggers for the Tribe. Since his MLB debut in 2015, Lindor ranks third in MLB in fWAR, behind just Mike Trout and Mookie Betts. However, he’ll be a free agent after the 2021 season if the Mets can’t get a long-term extension done, meaning there’s a significant risk that New York is cashing in some of their prospect capital for a one-year upgrade at shortstop.

It would be foolish to write off Carrasco’s inclusion in the deal. The 33-year old is signed through the 2022 season with a club option for 2023, so there’s a chance for the Mets to get some value out of this deal if Lindor leaves following the season. Carrasco was at his brilliant best in 2020, pitching to a 2.91 ERA over 12 starts and 68 innings, striking out 82 and walking 27. From 2014-18, he was one of the better pitchers in baseball, notching a 3.27 ERA over those five seasons with 963 strikeouts and 195 walks over 856 innings pitched. In 2019, Carrasco received a leukemia diagnosis that derailed his season, but he eventually returned to much fanfare before fully rebounding in the pandemic-shortened 2020 season.

Carrasco will slot into a Mets rotation that clearly needs help. Jacob deGrom was typically brilliant in 2020, but didn’t get much help. He’ll get that help in 2021 with the acquisition of Carrasco, Marcus Stroman’s return from opting out of the season, and Noah Syndergaard’s expected eventual return from Tommy John surgery.

Offensively, Lindor will essentially be a like for like replacement for Rosario in the lineup, joining a starting nine that includes Brandon Nimmo, Michael Conforto, Pete Alonso, and newly-signed catcher James McCann. It’s worth noting that the Mets offense wasn’t at all bad in 2020, slashing .272/.348/.459 and ranking as one of the three best offenses in the majors along with the Dodgers and Braves. The additions of Lindor, Carrasco, and McCann will clearly improve the team overall, and opens the door to contention in an NL East that isn’t all that daunting past the three-time division champion Braves.

As for the Indians…how can you be a fan of this team at this point? Last year, they went 35-25 and just missed out on the AL Central title, but were bounced in the Wild Card round by the Yankees. This comes despite the franchise trading Corey Kluber last offseason and Mike Clevinger over the summer. Now, Lindor and Carrasco are gone, along with free agents Cesar Hernandez and Carlos Santana (two of the team’s other productive offensive players in 2020). The team still has three-time top three AL MVP finisher Jose Ramirez on offense, and reigning AL Cy Young winner Shane Bieber anchoring the pitching staff, but there isn’t a ton past those guys.

Today’s trade has slashed Cleveland’s payroll down to just $16.9 million committed to three players in 2021, with the rest of the roster likely being filled out by cheaper arbitration-eligible or pre-arbitration players. Cost cutting has been the name of the game for Cleveland over the last year-plus, and while that goal has been achieved, it has come at the cost of all goodwill from fans. At this point, if Ramirez goes out the door over the next month or so, any remaining positive vibes around the organization could go along with him.