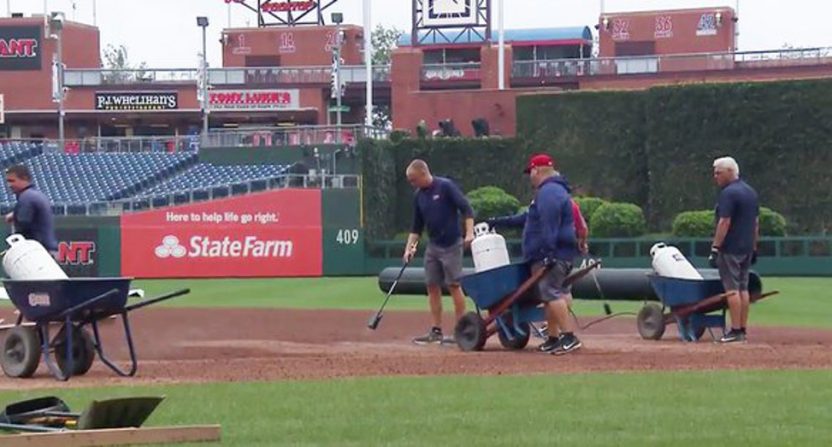 Heavy rain hit much of the East Coast this weekend, and that led to several sports cancellations, including the Washington Nationals’ home game against the Chicago Cubs. The Nationals are now on the road against the Philadelphia Philles, and it’s stopped raining, but they still might not get to play thanks to the sodden ground at Citizens Bank Park, which apparently wasn’t properly tarped Friday and never got the chance to fully dry thanks to the weekend’s rain. The groundskeeping staff sure made an effort to get the field ready, though, including using…flamethrowers?

Update: The grounds crew is taking some sort of flamethrower device to the infield dirt. https://t.co/wrragkwQOx

Phillies groundskeepers are using two flamethrowers to try to get the infield dirt ready in an effort to make the field playable for tonight’s game vs. the Nationals pic.twitter.com/ywwfE6NqDp

The Phillies have five flamethrowers drying the infield. pic.twitter.com/Gh8RMhwqmm

Yo the Phillies are blowtorching their field with an emergency fleet of blowtorches attached to propane tanks sitting in wheelbarrows being pushed slowly across the infield. https://t.co/cO5SdznbIh

Oh, and those weren’t just lying around. They brought them in specially. But, it seems that hasn’t fully fixed the field:

Phillies are having all kinds of problems with infield. Execs, GMs, Managers all looking at it. Blowtorches didn’t get job done. pic.twitter.com/aRcxcwOXsV

Nationals’ star Bryce Harper even contributed to the drying efforts:

Harper has picked up a rake. He tried it out. Now he's tossing drying agent on the field like he's feeding birds. Bryce Harper is trying to scatter diamond dry on the field. This is where we are.

But the game was eventually postponed, and it won’t be particularly easy to make it up; the Nationals are in town through Wednesday, but then have to head home to play the Cubs Thursday (the game that was postponed from Sunday). The teams will reportedly try for a doubleheader Tuesday, though:

Game is postponed. They’re not playing on this surface. Going to try for a doubleheader tomorrow.