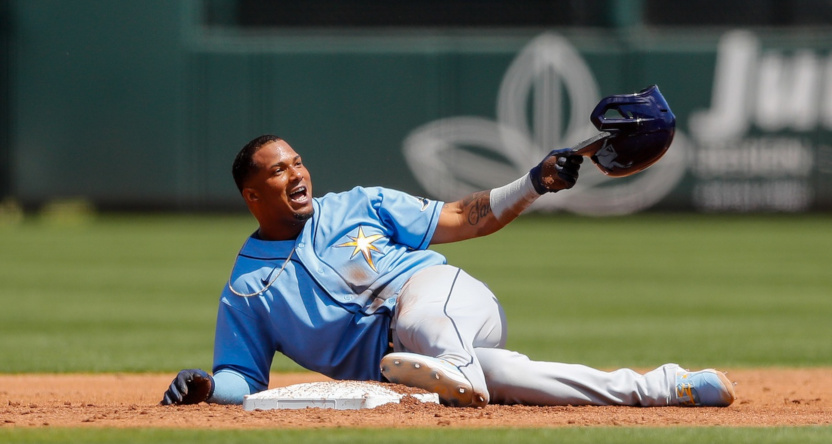 While the Tampa Bay Rays’ record of 43-30 is the seventh-best in baseball (and just 0.5 games back of the Boston Red Sox for first in the AL East), they do have some reason for concern given how things have been going for them lately. In particular, they had star pitcher Tyler Glasnow injured earlier this month, and they were just swept by the Seattle Mariners. And, following that sweep, as Marc Tompkin of The Tampa Bay Times reported, they’re going to call up top prospect Wander Franco (seen above in a March 14 spring training game), widely seen as MLB’s top prospect for the past two years:

BREAKING: It's Wander time. Top prospect Wander Franco has been told by #Rays he is being called up and will join them Tuesday when they open series against #RedSox at Trop.

Wander Franco, the No. 1 prospect in baseball, is headed to the big leagues with the Tampa Bay Rays, source confirms to ESPN. Franco, 20, is a shortstop but can play second and third base, too. He’s been wrecking AAA, hitting .323/.376/.601. Rays could use him. Lost six in a row.

Franco, who turned 20 in March, is currently the top-ranked MLB prospect by both Keith Law of The Athletic and Baseball America. Here’s more on Franco’s recent performance from Tompkin:

Franco, 20, has been playing for Triple-A Durham, where he is hitting .315 with seven homers, 35 RBIs and a .954 OPS in 39 games. He was told the news as the Bulls were busing from Norfolk, Va., to Jacksonville for their next series.

…Franco, named the consensus top prospect in the game for two straight years, said this spring he felt he was ready for the major leagues. And that was despite not having played above the Class A level or anywhere competitively since 2019 except for five games in winter ball.

The Rays wanted him to get some experience at the Triple-A level, both in terms of facing higher competition and learning to deal with success and failure. Likely also a factor was waiting to get past the projected mid-June cutoff for Super 2 eligibility for a fourth year of arbitration, though it’s not known if that system will be part of the next labor agreement.

And here’s Law’s writeup on Franco from January:

Franco nearly showed up in the majors during the Rays’ run to the World Series, traveling with the team in October, and then played five games in his native Dominican Republic before a biceps injury ended his winter. He retains the top spot on this list as he approaches his 20th birthday this March 1, but I’d bet he loses it this year by spending a good chunk of 2021 in the majors, because he wasn’t that far off even when 2019 ended. Franco has ridiculous hand speed and one of the best batting eyes in professional baseball, rarely striking out and making consistent, hard contact even as a teenager, with the projection of above-average power as he matures.

He hit a combined .327/.398/.487 as an 18-year-old in Low A and High A in 2019, while striking out just 7 percent of the time. Franco is a shortstop now and has the hands, actions and arm to stay there, although he could move to second or third if he loses any foot speed as he gets into his 20s. He’s going to play a skill position regardless, and his bat will make him a star at any of those spots, with high averages and OBPs early while the power develops, boasting the ceiling of an MVP candidate at his peak.

We’ll see how Franco does in the majors, but he’ll certainly be an exciting player to keep an eye on.