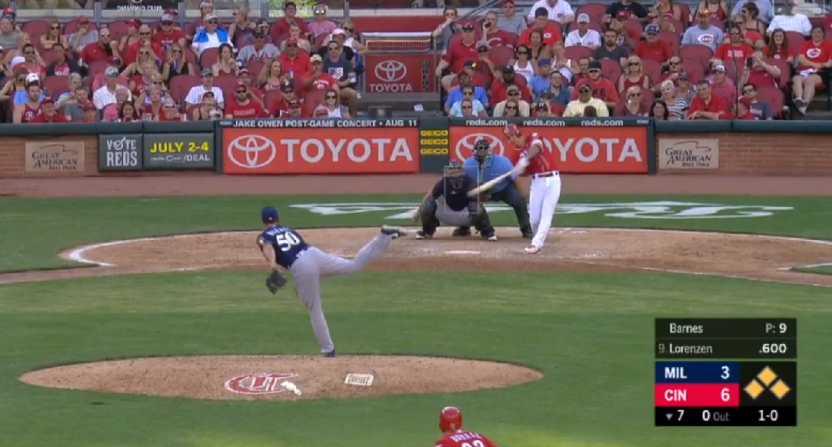 Michael Lorenzen has been one of the very few bright spots for the Cincinnati Reds’ pitching staff over the last few years, and is currently sporting a 1.93 ERA out of the bullpen in 2018.

He can also really swing the bat. In college at baseball powerhouse Cal-State Fullerton, Lorenzen was an outfielder (in addition to pitching) and had seven homers with a .927 OPS in his junior season.

Lately, the Reds have used Lorenzen off the bench to pinch-hit, and he’s certainly taken advantage of the opportunity. The 26-year-old entered play on Saturday 3-for-5, with two homers, and a walk in six plate appearances in 2018.

And in Saturday’s game against the Brewers, Lorenzen again got the chance to pinch-hit. All he did was crank a grand slam, and it was no cheapie:

Lorenzen has hit pinch-hit dingers in back-to-back games, and has three over the last week. He has three homers in his last three at-bats!

In his last 5 plate apps RHP Michael Lorenzen has singled, homered (pinch hit), walked, homered and homered (pinch-hit grand slam). His 3 HR are the most by a Reds batter whose primary position is pitcher since Micah Owings had 3 homers in 2009.

Michael Lorenzen has now hit a home run in each of his last 3 official AB. He had 2 HR in 56 career AB prior to this stretch.

He's the first primary-position pitcher with multiple pinch-hit HR in a season since Brooks Kieschnick in 2003, who also had 2. pic.twitter.com/AhDedwshVe

Check out the high exit velocities on Lorenzen’s hits this season:

Last March, Cincinnati.Com’s Zach Buchanan brought up the idea of being a two-player to Lorenzen, and the pitcher was excited about the idea.

“I don’t think I’m just a pitcher,” Lorenzen said. “I’m an all-around baseball player. One day it’d be sweet to be a two-way player. I’m not saying that’s something I can’t do. I really think that I can do that.”

Now, obviously someone has become a two-player in the majors since Lorenzen’s 2017 comments- Shohei Ohtani. And we’ve seen that work out quite well, with Ohtani being a star both on the mound (3.10 ERA), and in the batter’s box (.907 OPS) for the Angels this season (his arm injury isn’t related to doing both).

The Reds are 35-48 and well on their way to their fifth consecutive losing season. Their outfield currently ranks 20th (2.2) in the majors in WAR according to FanGraphs.

Why not give Lorenzen a real shot at a two-way player? What do they really have to lose? If it goes terribly, the Reds remain the bad, rebuilding team they were anyway. Cincinnati outfielders like Billy Hamilton and Adam Duvall likely aren’t a part of the next competitive Reds team either, so it’s not like Lorenzen is blocking player development. And the organization could really use a boost in fan interest.

Have some fun and see what Lorenzen can do as an outfielder. Maybe it turns out he’s legitimately good as a position player. His recent swings would indicate that’s a pretty decent possibility.