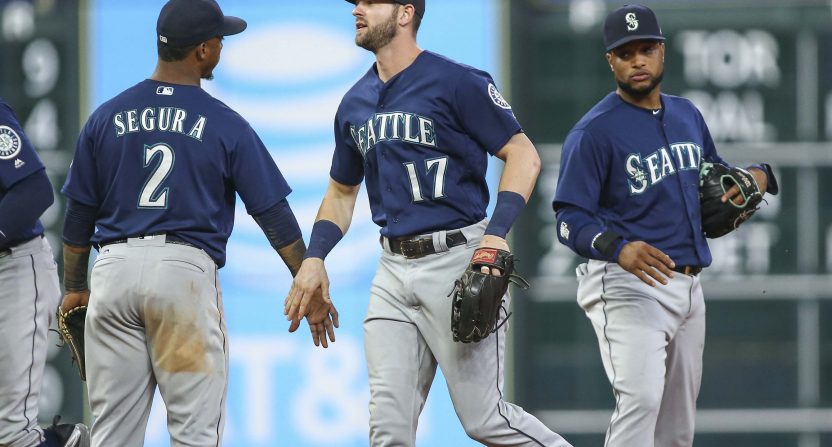 After finishing 89-73, you’d think the Seattle Mariners would be looking forward to building on that season heading into 2019. But apparently, that’s not the case for a team that hasn’t finished above .500 in consecutive seasons since 2000-2003.

The Mariners, who finished third in the AL West, 14 games back of the Astros and eight games back of the Oakland Athletics for the AL’s second Wild Card spot, are faced with the ugly prospect of potentially trading their best, cheaper, younger players this offseason because their higher paid veterans kinda stink now.

According to the Seattle Times, Mariners GM Jerry Dipoto is seeing the writing on the wall – the Mariners need to be better in 2019 in order to compete in the AL West, but with over $100 million dedicated to just five players, improving the team through the free agent market isn’t feasible. And dumping some of those high salaries to create payroll flexibility also isn’t feasible because those high-salaried players just aren’t that good anymore and don’t have much value.

Multiple MLB sources have said the Mariners are expected to be active in moving players and re-shifting the roster this offseason.  Dipoto will likely trade some key players in hopes of getting MLB-ready prospects that can contribute in 2019 or 2020.  The Mariners believed Mitch Haniger was that type of player when they acquired him before the 2017 trade deadline along with Jean Segura.

The problem for Dipoto is that players with the most trade value to teams are the young players that the Mariners would prefer to keep. Players like Felix Hernandez, Robinson Cano and Kyle Seager have minimal to no trade value.

“Guys like Haniger, guys like Marco Gonzales, guys like Edwin Diaz, these are the pieces that you’re trying to build around, not the pieces that you’re trying to send away,” Dipoto said. “So you know, we want to be conscious of the fact that we have built up what we think is that next sustainable young core, and built toward it. Those are guys who are all in their mid-20s.”

And yet, those players aren’t untouchable

“I don’t think there’s ever a player that’s off limits,” he said.

So Seattle has all of this money tied up in those five players, and they combined for a whopping 6.9 fWAR in 2018. Mitch Haniger, Seattle’s best player, is still a pre-arb player and made six figures last year. Jean Segura, Seattle’s second-best player, made $9 million in the first year of a five year, $70 million extension. James Paxton, the Mariners’ best pitcher, made $4.9 million in his second of four arbitration seasons. Marco Gonzales, their second-best pitcher, was still a pre-arb player and will make just $1.9 million over the next two years. Stud closer Edwin Diaz is still pre-arb, and won’t hit his arbitration years until 2020.

That’s where the Mariners are right now. They have a great core of players, all of whom (aside from Segura, whose contract kicks up to $14 million in 2019) are youngish and affordable. But that core wasn’t good enough for the Mariners to burst into the playoffs, and they’re going to need to build on that core to contend. But they don’t have many players outside of that core who they can trade *to* improve their team, and the highly paid veterans are both weighing down the payroll and providing performances that need to be improved upon. Do you see the problem here?

This is where of a “pause,” as mentioned by Dipoto, comes into play.

The idea of a “pause” was mentioned in that final press conference — a one- or even two-year break where the team may move some players in the hopes of being good at the end of the brief period.

Essentially, Seattle would punt on 2019, and maybe even 2020, with the goal of being good again in 2020 or 2021, when their payroll situation is more tenable. 2021 is probably the more realistic scenario, as far as payroll goes – only Hernandez comes off the books in 2019, while Leake and Gordon can be jettisoned by paying buyouts after 2020. That leaves Cano, Seager, and Segura as the club’s lone contracts in 2021, and Seager can be bought out at the end of that year.

But even if they’re not traded by then, Seattle’s youngish, cheap core will be older and not as cheap. Paxton is scheduled to hit free agency after 2020. Gonzales will get there after 2021, and both Diaz and Haniger will reach the mark after the 2022 season. Segura’s contract is also less cheap starting this season, and he’ll be eligible for free agency after 2023 (assuming a 2022 option is exercised).

By now, I think you can see the problem Seattle is facing. They’re not bad right now (though their record really overstated their performance in 2018), but they need to be better. They can’t get better because they’re paying five average to bad players a lot of money. The players they have with the most trade value are the members of the core they’re looking to build around. If they trade members of that core in an attempt to build for the near future, they risk losing the rest of that core and being left with nothing of significance.

This is probably the worst position for a baseball team to be in – they’re good, but they’re not good enough, and there’s no obvious way for them to get better without unloading some of their top performers. Blowing it all up and starting over isn’t a great outcome, and neither is stubbornly pushing forward with the current roster.