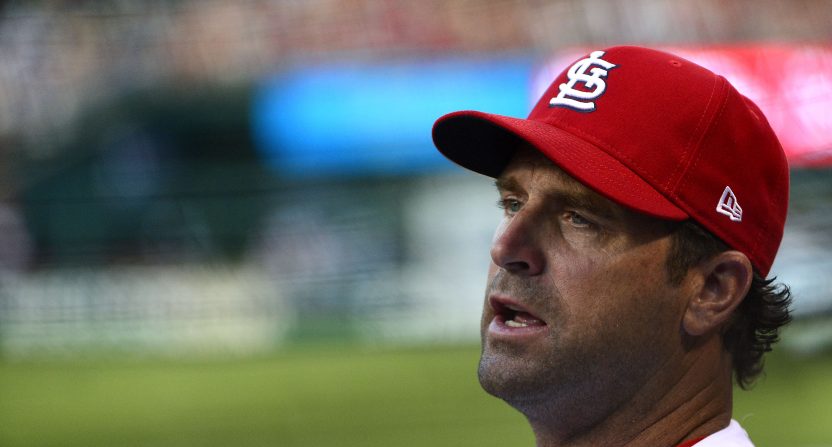 The St. Louis Cardinals continued their disappointing first half with an ugly 8-2 loss at home to the Cincinnati Reds on Saturday, to fall to 47-46 on the season.

Within a couple hours of the loss, the Cardinals sent out a tweet announcing the firing of manager Mike Matheny. Hitting coach John Mabry and assistant hitting coach Bill Mueller were also fired. Bench coach Mike Shildt has been named the team’s interim manager.

To repeat: #stlcards have fired Mike Matheny, in the middle of the season. Rare move for DeWitt & Co. in this leadership. Mike Shildt takes over as manager. More news coming.

This decision was long overdue. While the rosters have been very flawed, the Cardinals have been big disappointments over the last three seasons after making the playoffs in Matheny’s first four seasons as manager (2012-15).

The Cardinals made the postseason in each of Matheny's first four seasons as manager (2012-15), but haven't made it since 2015. pic.twitter.com/GNwo21BWQS

But Matheny’s hard-ass, old-school managing style has also been heavily questioned, and his comments following Bud Norris’ treatment over Jordan Hicks is what likely made the Cardinals’ front office decide enough is enough.

Matheny is the worst. Like I mean even when I tried to use metrics to judge managers he was bottom of the league, and then it comes out repeatedly he can’t manage the non metric stuff, the people managing. https://t.co/275muZge4s

The lethargic and messy baseball aside, and crumbling player relations aside, I can share this: management was not happy with Matheny’s quotes in @markasaxon piece in @TheAthletic (1/2)

As I wrote for @TheAthleticSTL Friday, management uncomfortable with Matheny’s expressed zeal for old-school tough guy stuff and referring to today’s game as “soft” … felt (2/3)

That (3/3) whenever Matheny gets on the soapbox with old-school preaching that’s a huge turnoff to young players, it reinforced team’s rep as uptight, stressed, humorless and not a fun place to play.

That’s why I was astonished by the attacks on @markasaxon ; without Matheny running his mouth and all but bragging over having Bud Norris being his enforcer/snitch, Saxon had much less to build his piece around. Today’s players are different. This manager never got that.

And USA Today’s Bob Nightengale reports that former Yankees and Marlins manager Joe Girardi is the favorite to take the full-time job. The former catcher played his final MLB season with the Cardinals in 2003.

Was told before season if #stlcards move on from Matheny that Mozeliak is a fan of Girardi. Will be interesting if Girardi gets job or is deemed too similar to Matheny: intense ex-catcher who does not mix great with media.

Now, here’s the thing: the front office deserves even more blame for the team’s performance the last few years and president of baseball operations John Mozeliak recently threw one of their own players under the bus. So Mozeliak should be viewed on the hot seat as well.