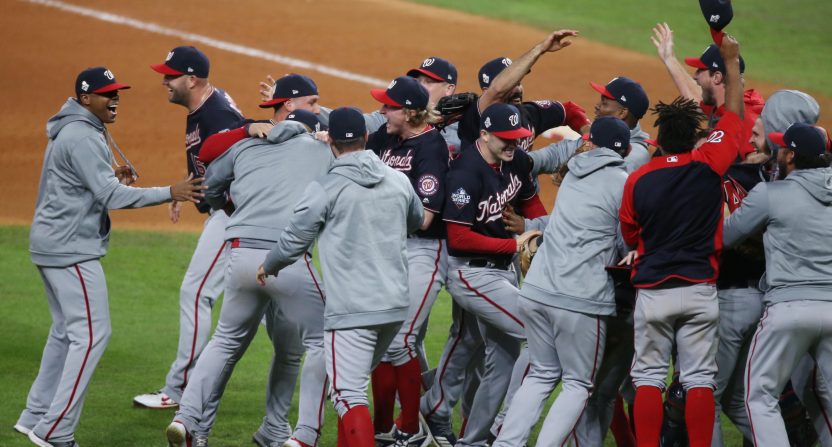 The Washington Nationals are World Series champions, and what a road they took to get there. And “road” is the key word there.

The Nats took down the Houston Astros 4-2 in Game 7 Wednesday night at Minute Maid Park to win the World Series. Every game in the series was won by the road team, with the Nats going 4-0 in Houston (where the Astros were 60-21 in the regular season), and winning the final two games after losing three straight at home in DC.

For the first time EVER, the @Nationals are world champs! pic.twitter.com/RpsDfq8OCL

The Astros took a 2-0 lead into the seventh inning, with starting pitcher Zack Greinke cruising. But with one out in the inning, Anthony Rendon crushed a Greinke pitch over the left field wall for a solo homer.

Rendon with a ROCKET. #WorldSeries pic.twitter.com/KJKPAdx8ud

Greinke then walked Juan Soto, and was removed at just 80 pitches in a very questionable move by Houston manager A.J. Hinch. Well, the second pitch reliever Will Harris threw turned into a go-ahead two-run homer by Howie Kendrick (who also hit the go-ahead homer in the Nats’ NLDS-clinching victory over the Los Angeles Dodgers).

The Nats padded the lead with a Juan Soto RBI single in the eighth.

And an Adam Eaton two-run single in the ninth.

Washington ace Max Scherzer wasn’t as sharp as usual, but he did still go five solid innings, allowing two runs. And another ace-esque arm in Patrick Corbin came out of the bullpen in relief of Scherzer, and threw three scoreless innings for the Nats.

The Nats were 19-31 at one point in the regular season. They trailed the Milwaukee Brewers by two runs in a win-or-go-home Wild Card game entering the bottom of the eighth inning.

Worth reminding that the Nationals were trailing the Wild Card Game by 2 runs entering the bottom of the 8th inning.

I wonder what their championship odds were at that moment.

The @Nationals had LESS than a 0.1% chance to win the #WorldSeries on May 28th.

And now they’re world champions. What an incredible, and well-earned title run by the Washington Nationals.