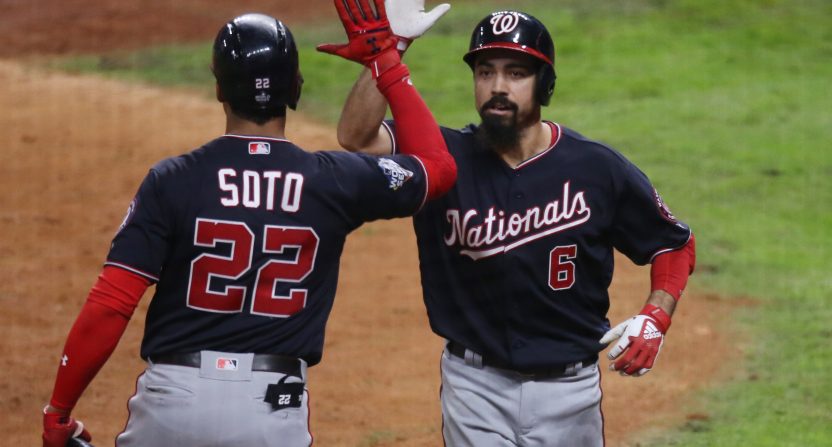 The Washington Nationals came away with a 7-2 victory over the Houston Astros on Tuesday night at Minute Maid Park to send the World Series to a Game 7. But just looking at the score (or the box score) hardly tells the story of Game 6.

The game featured Houston’s Alex Bregman and Washington’s Juan Soto hitting home runs, and carrying their bats to first base.

SOTO TO THE MOON. pic.twitter.com/9FrMo3zIsE

The play generating the most conversation involved Trea Turner being called out for interference while running a direct line to first base in the seventh inning. Instead of having runners on second and third with no outs, the controversial call resulted in the Nats having just a runner on first with one out.

Turner was called out for interference here. Does anyone have any thoughts on it? pic.twitter.com/2ypzp7jzcV

That understandably led to Nats manager Davey Martinez being quite angry, and he was ejected.

can we talk about this spin move pic.twitter.com/dbTD3CRhRT

But the Nats were able to still get two runs in the inning anyway, thanks to an Anthony Rendon two-run dinger.

And Rendon put the game away with a two-run double off the right-center field wall in the ninth inning, giving him five runs batted in on the night. You can see why the free-agent-to-be will get paid quite well over the offseason.

The Nats got a brilliant pitching performance from Stephen Strasburg, and especially after the first inning. Straburg allowed two runs in the first, and followed it up with 7 1/3 scoreless innings before being removed in the ninth. Strasburg was informed he was tipping pitches in the first inning, and made an adjustment that led to total domination afterward.

Talk about an outstanding in-game coaching adjustment! This is remarkable from pitching coach Paul Menhart.

In the first inning of a World Series elimination game, Strasburg was accidentally tipping pitches. His coach corrected him between innings & he was flawless thereafter. pic.twitter.com/gYyzXFLy2f

So now we go to Game 7, and it appears Max Scherzer will be good to go against Zack Greinke.

Davey Martinez says that if there is a Game 7, Max Scherzer will start for the Nationals.

And if the Astros are able to win, they will become the first home team to win in the series. Yes, the road teams has won all six times. 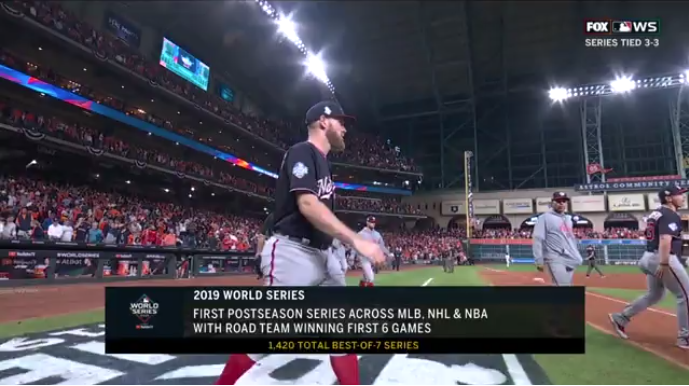 We don’t have to wait long for Game 7, with first pitch set for 8:08 PM ET on Wednesday night.