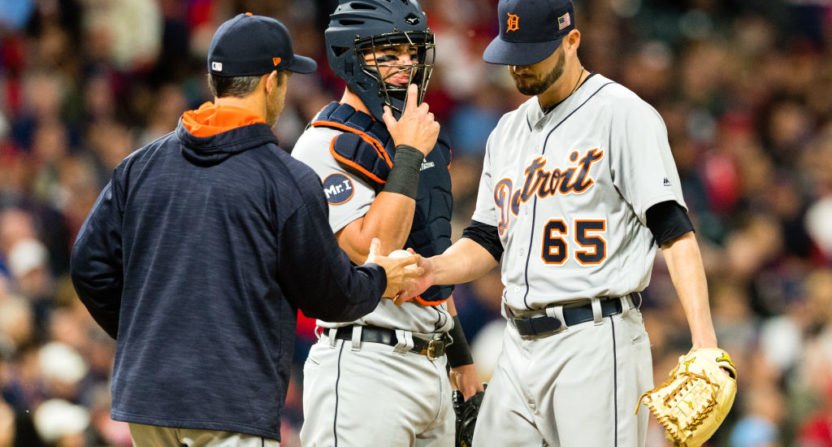 After a couple ejections ? pic.twitter.com/7Wg7DY5uAt

Many people, including the Indians’ broadcasters and possibly the ump himself, thought Farmer and backup catcher John Hicks conspired to nail the ump. As former pitcher Dallas Braden pointed out on Twitter, that play warrants a bit of suspicion, although it’s impossible to tell for sure if the Tigers planned to bean the ump. Farmer’s pitch had plenty of movement, but Hicks didn’t even get a piece of his glove on the ball. Hicks also didn’t turn around to check on Wolcott, as catchers typically do when the umpire gets hit.

Ausmus, Farmer and Hicks vehemently denied any intention behind that play. Of course, that’s exactly what you’d expect them to say. But their explanations make sense. From the Detroit Free Press:

“To imply that was intentional is, first of all, a lie,” Ausmus said. “If any player intentionally tried to hurt an umpire on this team, we’d deal with it severely.

“For anyone to imply it was intentional is completely wrong. They are out of line in saying that, quite frankly.”

Farmer took to Twitter to explain himself, saying he respects the game too much to intentionally hit an umpire:

Hicks explained that he simply got crossed up:

“Obviously, it looked bad right after Brad and (McCann) got tossed,” Hicks said. “But it’s bases loaded and we’re trying to win a baseball game. Any thought of us trying to do that on purpose is just ridiculous.”

That play looked bad because of the timing, but ultimately the Tigers deserve the benefit of the doubt here. It looks like that was just a mix of bad luck and poor timing.