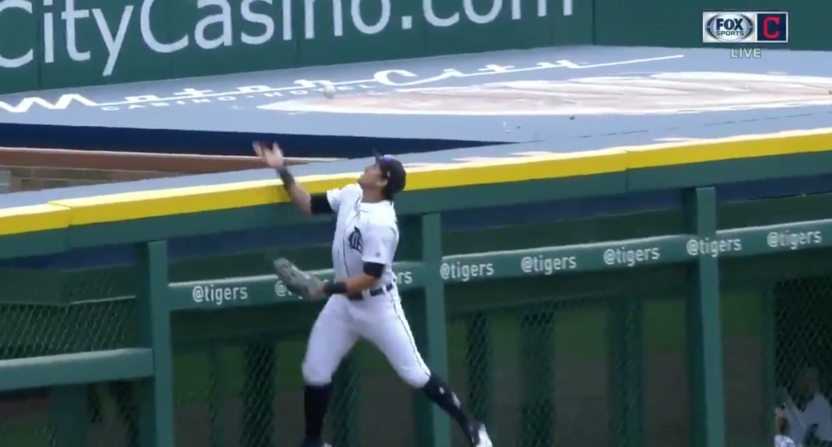 At the most basic level, just about every home run follows the same pattern. Batter hits ball, fielder runs back, ball goes over fence, batter rounds the bases, runs go up on the scoreboard. Different home runs look different, of course, but the basic formula rarely changes.

During the first inning of Sunday’s Indians-Tigers game in Detroit, Ramirez hit a line drive to left field and Mahtook ran back to chase it. The ball hit off the top of the wall (in play), popped up in the air as Mahtook ran toward it, then hit the wall again (still in play). This latter bounce seemed to confuse Mahtook, who awkwardly leapt and reached for the ball… only to knock it over the fence for a thoroughly bizarre home run.

Indians' Jose Ramirez gets a boost from Tigers OF Mikie Mahtook to give him his 21st homer of the season.

It’s almost sad to watch Mahtook flail at the ball as it plops over the fence. Having watched this play several dozen times, I still can’t quite figure out why he charged the ball like that and stuck out his bare hand. Why did he jump? What did that accomplish? And why not use his glove? Mahtook was apparently so surprised by the second bounce that he acted 100 percent irrationally.

This was not quite Jose Canseco bad, but it was at least Trayce Thompson bad.

Regardless, Mahtook probably wishes that ball had just flown over the fence regularly, to spare him the embarrassment. And the newly rebuilding Tigers probably wish just a little that they hadn’t traded Justin Upton.