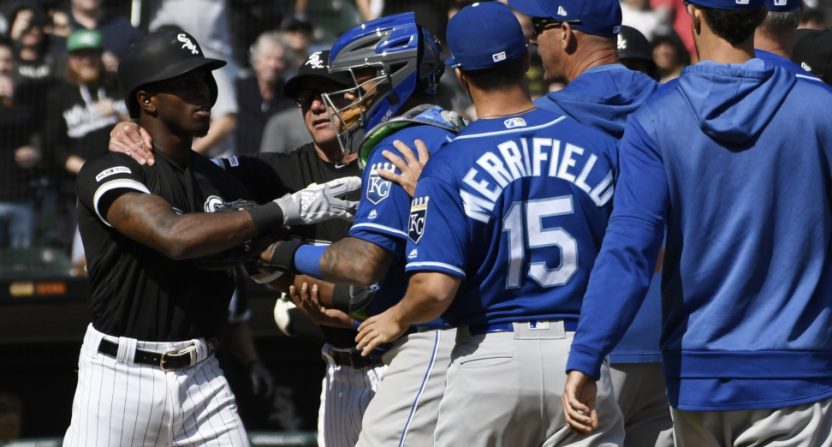 Tension in baseball over celebrations has been seemingly amping up over the last few years, but Wednesday saw a particularly strange one. In the Kansas City Royals-Chicago White Sox game, White Sox shortstop Tim Anderson hit a home run and launched a mammoth bat flip; in his next at-bat, he was hit by Royals’ pitcher Brad Keller.

That led to Anderson talking to catcher Martin Maldonado, to the benches clearing, to White Sox manager Rick Renteria going after Royals’ manager Ned Yost, to home-plate umpire Joe West physically holding Renteria back and tossing Anderson as well as Keller, and to some criticisms of the reaction from the Royals and West from an unusual source; NBC Sports Chicago White Sox play-by-play announcer Jason Benetti. First, here’s Benetti’s call of the home run, complete with “the ball was majestic, the bat was a javelin”:

Here’s the White Sox broadcast zooming in on Renteria being held back by West:

We are here for Joe West literally holding back Ricky Renteria pic.twitter.com/J8X78yF7wZ

There don’t appear to be many video clips of Benetti’s comments on the situation beyond that one, but tweets make it pretty clear he was quite critical.

“Fun in baseball is not allowed. We have to yell at each other, because he flipped his bat because he hit a home run. Why don’t you just get him out?”

I'm surprised that Joe West hasn't ejected Jason Benetti for talking smack about him on the air for being Joe West.

On the plus side, Jason Benetti is going nuts and I’m loving it

Meanwhile, NBC Sports Chicago analyst Scott Podsednik was also quite critical of this (especially West’s ejection of Anderson) after the game (which the White Sox would lose 4-3 in 10 innings), calling it “bananas” and more:

"It's the first time I've ever seen a guy that got hit by a pitch ejected. He didn't throw any punches. He didn't attack anybody" -Scotty Pods

There’s been backlash to beanings and other criticisms of celebrations before, of course, including a “Let the kids play” ad from MLB itself last postseason (which the White Sox were referencing in their home run tweet). But many baseball broadcasters are older and grumpier, and love finding things to criticize in today’s game, often including celebrations. So it’s interesting to hear some of that backlash coming from someone in a broadcast booth.

3 thoughts on “Tim Anderson hit a home run, flipped his bat, was drilled, and was ejected, and White Sox announcer Jason Benetti got upset”