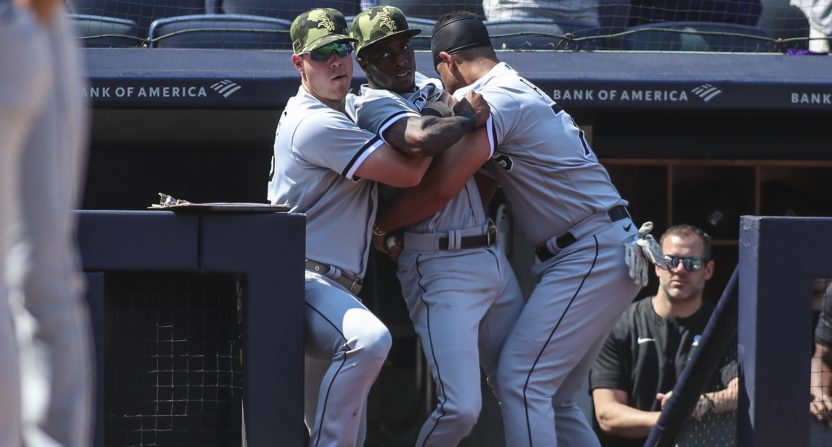 Tensions were high during Saturday’s game between the Chicago White Sox and New York Yankees, with much of the drama centered around New York’s Josh Donaldson and Chicago’s Tim Anderson. They were triggered by some unfortunate words.

Donaldson and Anderson were seen jawing with each other at the end of an inning. And while nothing really materialized from it, Anderson was guided off of the field by his teammates.

Tim Anderson once again says something to Josh Donaldson and this time Donaldson chirped back pic.twitter.com/vyTrsl1xln

The benches cleared later in the game when Donaldson came to the plate and had an unpleasant discussion with White Sox catcher, Yasmani Grandal. While Grandal and Donaldson were at the center of that incident to start, it was Anderson that had to be forcibly restrained by teammates Gavin Sheets and Jose Abreu.

Grandal and Donaldson exchanged words at home plate, benches cleared, TA had to be restrained 😳 pic.twitter.com/3OgsVivV7U

So, what happened? When the game was over, Chicago manager Tony La Russa said that Donaldson made some racist remarks, but wouldn’t elaborate any further. Anderson, however, did, saying that Donaldson called him “Jackie Robinson.”

We all knew Josh Donaldson is a piece of trash but this just confirmed it again. https://t.co/bRkdHGnmUx

The way some folks are gonna try and explain this away. He wasn't being complimentary, he was being racist. I believe Tim Anderson. https://t.co/Nq4JYqYSf1

this is absolutely disgusting. https://t.co/6LuCNY2V1B

this is absolutely disgusting. https://t.co/6LuCNY2V1B

Naaa if this did happen @MLB need to do something about this… that’s ridiculous!! https://t.co/zeWR3PIqsX

Tim Anderson says Donaldson said to him “Hey, Jackie,” a disrespectful reference to Jackie Robinson. Tony LaRussa understandably referred to it as “racist.” MLB must declare it unacceptable by suspending Donaldson. No place in game for that dialogue. Your move Manfred. #WhiteSox https://t.co/rjAwo1C1w4

While there are two sides to every story, Donaldson doesn’t deny calling Robinson that. He did say, however, that there wasn’t anything racist meant by it.

Donaldson referenced Anderson calling himself “today’s Jackie Robinson” in 2019 and said it was something the two had joked about previously.

“Obviously, he deemed that it was disrespectful. And look, if he did, I apologize. That's not what I was trying to do, by any manner.” pic.twitter.com/eko1UaR3Nt

While Donaldson’s explanation does offer a slightly different context, it was not met with overwhelming support by any means.

Hearing his explanation does add some context and we dont know for sure what the intent was from Donaldson as well as wether Tim had accepted the joke in the past and today just wasnt feeling it etc. Ultimately Josh shouldnt be joking like that. Period. https://t.co/QfRdk51iZW

Josh Donaldson and TA clearly had beef from their last series…

So Josh Donaldson decided TODAY would be a good day to ‘jokingly’ call TA, Jackie as benches were being cleared?

Josh Donaldson has never “diffused” any kind of confrontation in his career. He’s just lying plan and simple https://t.co/6ov3PJ5pDu

This is a human thing, there are places you just shouldn’t go. It’s a poor choice of words, Especially in the climate of our country. Honestly, Donaldson and Anderson should spend a day together off the field, thats where the real change happens. https://t.co/JLcAxoFAua

The fact that Donaldson and Anderson had an incident a week prior to this one does make Donaldson’s explanation that it was intended to be light-hearted harder to believe. We can expect some kind of reaction from Major League Baseball. Whether it will be to everyone’s liking is a different matter.

The White Sox and Yankees will have a double-header on Sunday. After that, though, this drama will likely be put on ice for a while, as the two teams don’t play again in 2022.