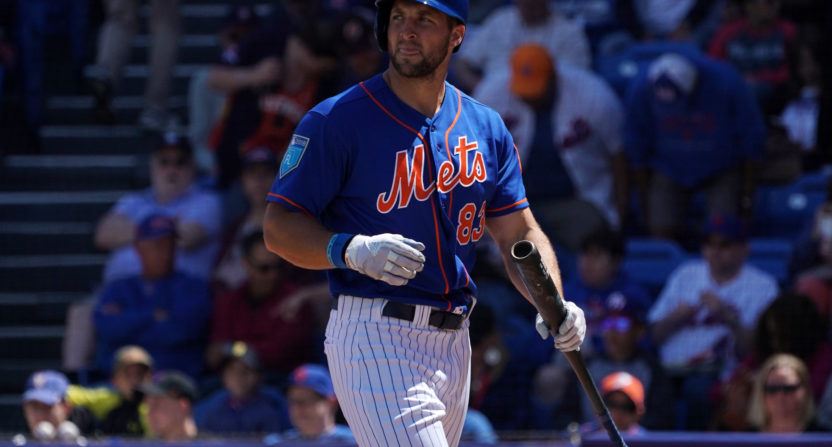 Notable non-prospect Tim Tebow started the 2018 Minor League Baseball season with the Binghamton Rumble Ponies (yes, that’s actually their name) of the AA Eastern League. In the team’s first game of the season on Thursday night against the Pawtucket Red Sox, Tebow hit a three-run dinger on the first pitch he saw.

UPDATE: @TimTebow crushed a three-run homer on the first pitch he saw for @RumblePoniesBB. pic.twitter.com/oOoGewbB5I

You may recall (or maybe not, because you spend your time thinking about things that matter) that Tebow homered in his first at bat last season with the Columbia Fireflies. After slashing a downright pedestrian .220/.311/.336 with three homers in 64 games, he earned a well-deserved promotion to high-A St. Lucie, where he turned in a similarly impressive .231/307/.356 triple slash, launching five dingers.

It’s been said before, and it’ll be said again by many people, but I’ll say it one more time for the record: Tim Tebow is not a legitimate prospect. He’s a sideshow that the Mets are promoting to sell tickets and merchandise for their minor league affiliates. If Tebow was doing this after years away from the game at say, age 25, then maybe we could talk about his future baseball career. But he’s but 25, he’s 30. He’s older than Gary Sanchez, Aaron Judge, Giancarlo Stanton, and all but four (ALL BUT FOUR!) members of the Yankees 25-man roster. He’s only four months younger than Jay Bruce, the Mets’ current right fielder who has played over 1,400 games in the majors. He’s closer in age to Jose Reyes than Amed Rosario.

But hey…we’re apparently gonna do this shit for another season. Cool. Very cool. I can’t wait for the inevitable promotion to the AAA Las Vegas 51s in June.