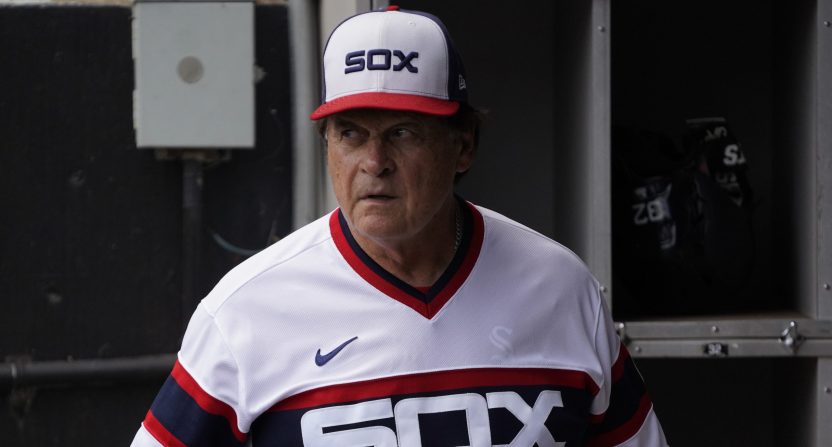 As had been expected for some time, Chicago White Sox manager Tony La Russa officially announced Monday that he is stepping down from that position due to health issues.

The 78-year-old has been away from the team since August 30 when he was told by doctors that he needed to undergo testing related to a heart issue. La Russa said in his statement that the issue is related to a pacemaker that was installed in February. During his absence from the team, a second issue was also discovered and it was announced he wouldn’t coach again in 2022.

Statement from Tony La Russa, who announces he's stepping down due to health issues, but also adds:

"Our record is proof. I did not do my job." pic.twitter.com/k8pRxmpa8W

“At no time this season did either issue negatively affect my responsibilities as White Sox manager,” La Russa said in the statement. “However, it has become obvious that the length of the treatment and recovery process for this second health issue makes it impossible for me to be the White Sox manager in 2023. The timing of this announcement now enables the front office to include filling the manager position with their other off-season priorities.”

The longtime MLB manager added that his “overall prognosis is good, and I want to thank everyone who has reached out to me with well wishes related to my health.”

While his health was the main concern, La Russa did admit that the team faltered under his leadership which he referred to as “an unacceptable disappointment.”

"It's an unacceptable disappointment. … Our record this year is proof I did not do my job." pic.twitter.com/YPAehVBJgd

“Our team’s record this season is the final reality,” La Russa said. “It is an unacceptable disappointment. There were some pluses, but too many minuses. In the Major Leagues, you either do or you don’t. Explanations come across as excuses. Respect and trust demand accountability, and during my managerial career, I understood that the ultimate responsibility for each minus belongs to the manager.”

The White Sox won the AL Central in La Russa’s first season back with the team last year (he previously managed the White Sox from 1979 to 1986). However, the team stalled out in 2022 and La Russa’s decision-making was questioned on multiple occasions. They were 63-65 when he left and are 79-80 heading into the final stretch of the regular season.

“I still appreciate the chance to come back home to the White Sox and leave today with many more good memories than disappointments,” he said. “As I have said many times during my career, no manager has ever had more good fortune than I have.”

Reactions from all over the MLB world rolled in after the announcement.

Wow, Tony La Russa—maybe the greatest manager of all time, who hadn't been heard from since a storybook ending to his career where he went out as manager of a World Series-winning St. Louis team in 2011—is for some reason issuing a White Sox-related press release? Weird stuff! https://t.co/9e7HQkXbrn

Have so many thoughts on LaRussa, but wish him a healthy future and a happy retirement. https://t.co/qxPs9CFUZO

I can appreciate the hard honesty in this statement, especially in saying "I did not do my job."

I respect that a lot granted it's absolutely the bare minimum.

Regardless, I wish Tony well and hope that he recovers well from whatever health concerns he is facing. https://t.co/oFInGF7CPb

It was a hire that should have never been made.

Jerry did everyone, including Tony, a disservice.

The Tony La Russa era is finally over. One of the better days this franchise has had in awhile without a doubt.