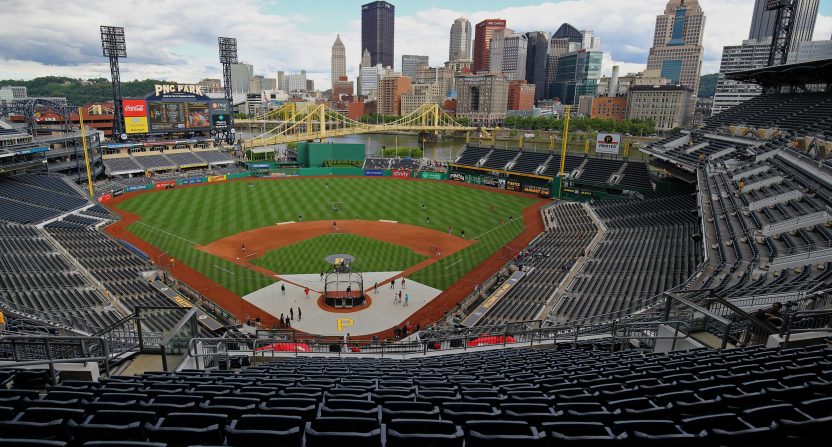 The Canadian federal government denied the Toronto Blue Jays’ request to play regular-season games at Rogers Centre this season, due to COVID-19 concerns about teams traveling back and forth from the United States. Buffalo — home of the Blue Jays’ Triple-A team — has appeared to be the favorite to serve as the Blue Jays’ home in 2020, with Dunedin, FL — their spring training site — also under consideration.

However, the Toronto players would like to have their home games in a major league ballpark, with Blue Jays reliever Anthony Bass saying on Sunday that the front office is determined to try to make that happen.

Reliever Anthony Bass says Jays management has told players it is determined to try to find a Major League Ballpark for the team to play in. #Bluejays

Well, it appears that the home of the Pittsburgh Pirates is a major league ballpark being considered for Blue Jays home games.

Jason Mackey of the Pittsburgh Post-Gazette reports that the Blue Jays have “looked into playing select home games at PNC Park in 2020.”

Mackey adds that “there are surprisingly few scheduling conflicts” between the Blue Jays and Pirates; the two teams have home games on the same day just seven times, and six of those come after the first week of September.

After Canada declined to allow the Blue Jays to play in Toronto this season, primarily because it would require repeated cross-border trips, multiple sources told the Post-Gazette on Sunday that they’ve looked into playing select home games at PNC Park in 2020.

It’s not known how many games would be played in Pittsburgh, although there are surprisingly few scheduling conflicts between the two.

Of the Blue Jays’ 30 home games in 2020, the Pirates have a home game the same day just seven times. Six of those come Sept. 8 or later, too.

Rob Longley of the Toronto Sun is also hearing that PNC Park “is one of the options” in the mix, but there are still “many moving pieces.”

Per source: Pittsburgh is one of the options in the #Bluejays mix for a home stadium. Front office in steady contact with MLB head office and with Jays players as the process moves along.

A #Bluejays source cautions that there are still many moving pieces, but PNC Park definitely one of those pieces.

PNC Park is one of the best ballparks in baseball, and Blue Jays players would surely approve of this site for home games- especially over minor league facilities.

The Blue Jays are scheduled to have their first home game on July 29 against the Washington Nationals.

UPDATE: Camden Yards — home of the Baltimore Orioles — is also under consideration for Blue Jays home games, according to Ben Nicholson-Smith:

Baltimore’s Camden Yards has emerged as a possible alternate site for a Toronto Blue Jays team in need of a temporary home.

The Blue Jays are actively looking at the possibility of playing some ‘home’ games in Baltimore, according to industry sources.

However, Jon Heyman of MLB Network reports that PNC Park “appears to be the current leader to host at least some Jays games this year.”

Pittsburgh’s PNC Park appears to be the current leader to host at least some Jays games this year. They’re still working on trying to avoid schedule overlap but PNC is a nice place and Pirates/MLB are amenable. Jays understandably prefer MLB Park. @longleysunsport mentioned Pitt

And “some” is a key word in all of this; it’s very possible that the Blue Jays go with multiple sites for home games.

We at Baseball America have verified with MiLB that no MiLB park meets the current MLB standards for stadium lighting.

The one non-MiLB park that has been mentioned to us as having potentially MLB-caliber lighting (important for broadcasts as much as game-play)? Omaha's TD Ameritrade, since it hosts the College World Series (which is broadcast on ESPN).

The Blue Jays have zero good options here. Buffalo is closest, but doesn't meet MLB standards for lighting or clubhouse, and what does close matter players/staff can't live in Toronto and commute to games (closed border)?

Update IV: Hazel Mae of SportsNet reports that she “can confirm the Blue Jays have been told they will be calling PNC Park ‘home’ this season.”

Can confirm the Blue Jays have been told they will be calling PNC Park “home” this season per MLB source. @longleysunsport was first to suggest Pittsburgh as option.

UPDATE V: The Pennsylvania Department of Health announced on Tuesday that they won’t allow the Toronto Blue Jays to play their home games at PNC Park. So, now the Blue Jays have to really scramble to find a new home before their first home game on July 29.

The Pennsylvania Department of Health announced today that it will not allow the Toronto Blue Jays to play their shortened 2020 season at PNC Park in Pittsburgh. https://t.co/og8ZxLdlp0