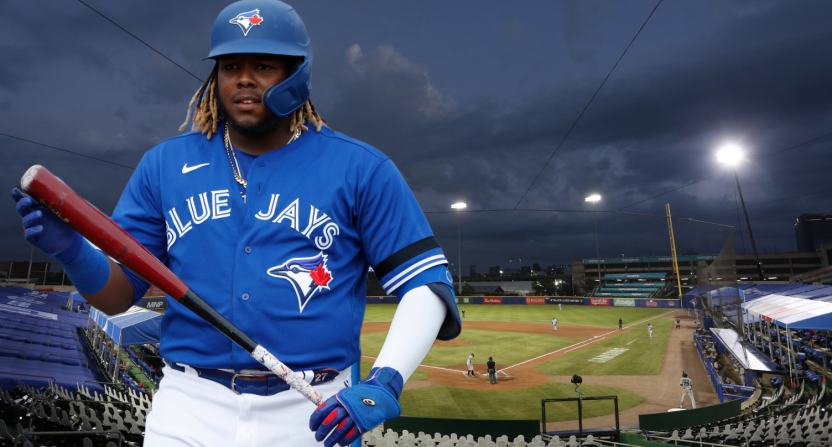 Like many Florida residents during the spring and summer, the Toronto Blue Jays are heading back up north in June.

But the Blue Jays won’t yet be returning to Toronto due to Canada’s COVID-19 travel restrictions requiring international travelers to quarantine for seven days. As of June 1, the team will again move to Buffalo, home of Toronto’s Triple-A affiliate, to play its home games.

How long the Blue Jays will play in Buffalo has yet to be determined, depending on whether or not Canada eases its COVID-19 restrictions. But the team is selling tickets for games at Sahlen Field through July 1, which includes home series versus the Miami Marlins, Houston Astros, New York Yankees, Baltimore Orioles, and Seattle Mariners.

According to the Buffalo News, tickets for the games through June 17 will go on sale May 13, while seats for the remainder of the homestand will be available June 3.

The Blue Jays also have a three-game home set with the Tampa Bay Rays scheduled from July 2-4, but the team isn’t selling tickets for that series yet. (It seems unlikely that the Blue Jays would go from playing in Buffalo to appearing in Toronto the next day. But their July 1 game vs. Seattle is a day game, scheduled for 1:07 p.m. ET, so there would presumably be suitable travel time.)

So at least 15 to 18 MLB games will be played in Buffalo this season. If the Blue Jays end up playing the remainder of the 2021 season there, they could play up to 59 games at Sahlen Field.

Renovations are being made to the ballpark to meet major-league standards, including moving the bullpens behind the outfield walls, installing additional lighting poles, and re-sodding the outfield grass. New batting cages, weight room, and clubhouse are also being constructed. To accommodate the Blue Jays, the Buffalo Bisons Triple-A team will play in Trenton, New Jersey.

The Blue Jays played 26 games at Sahlen Field during last season’s COVID-shortened 60-game campaign, compiling a 17-9 home record. The difference this time around is that fans will be allowed into the ballpark for home games, though still a limited number. Approximately 3,500 fans (or 24 percent capacity) will have access to seating, due to New York state requirements for six feet between seating pods.

Fans attending games in Buffalo will have to present proof of full vaccination (received 14 days prior to the game), a negative COVID-19 test result (taken within 72 hours of the game), or a rapid antigen test taken within six hours of the scheduled start time.

The Blue Jays began the 2021 season playing home games at TD Ballpark in Dunedin, Florida, their spring training complex. The team has a 7-4 record during their 11 games in Dunedin with 11 more scheduled to be played.

Toronto’s Major League Baseball team has not played at Toronto’s Rogers Centre since Sept. 29, 2019, though did hold summer camp workouts there before last season began.