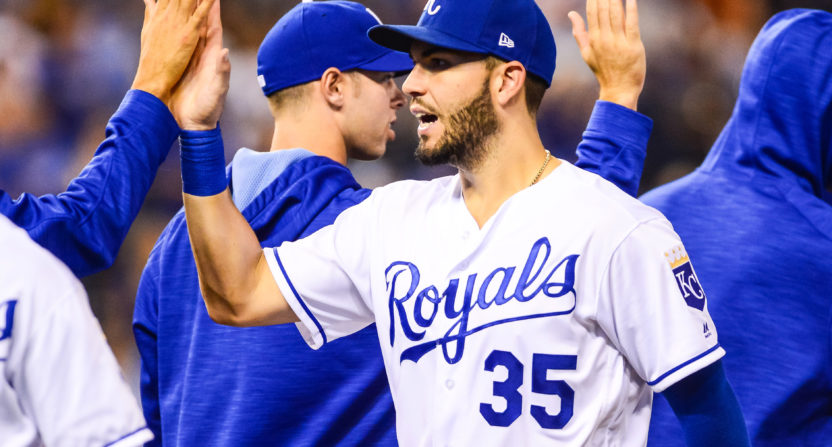 But that doesn’t mean they can’t use some help. We asked our writers to offer some free advice to a major-league front office of their choice. Here are their answers:

If you could give advice to one MLB general manager, what would it be?

Joe Lucia:  To AJ Preller and the San Diego Padres…

San Diego won 71 games last year, finishing fourth in the NL West behind three playoff teams. This winter, only one of those three teams got worse (the Diamondbacks, who appear poised to lose J.D. Martinez, and are still really good), and the team who finished behind the Padres (the Giants) got better.

Hosmer isn’t going to propel the Padres into the playoffs. Hell, he might not even drag them out of the basement if the Giants improve like expected. So why spend the stupid amount of money on him and shift Wil Myers (who isn’t a good defensive outfielder) back to the outfield? It’s just not logical. It’s spending money just to spend money, and it’s not a wise move for a franchise that isn’t going anywhere next year — or the year after that, or maybe even the year after that.

Ian Casselberry: I’d advise Texas Rangers general manager Jon Daniels to jump into free agency and make a big signing. Is there another true power bat besides Joey Gallo in the middle of that lineup? Do the Rangers believe Rougned Odor is that guy or that Mike Napoli could produce yet again if he’s brought back? Rangers’ DHs battled a collective .244 with a .693 OPS and 15 home runs last season.

How about putting J.D. Martinez into that lineup? The Rangers need right-handed power. Stick his bat in between Odor and Gallo in the heart of that batting order. Alternate him with Choo (who Texas is stuck with for another three years) in right field and at DH.

The Rangers could also use help on the pitching side. Texas starting pitchers compiled a 4.66 ERA and .762 opponents’ OPS last season, ranking solidly in the middle of the AL pack. Is that enough to challenge the Astros in the AL West? Or more realistically, to hang with the Angels — who seem to have leapfrogged them in the AL wild-card race?

The Rangers have nibbled at the middle and back end of their rotation with Matt Moore and Doug Fister, while giving Matt Bush a shot at the rotation. (But does that weaken the Texas bullpen?) Yes, Yu Darvish contributed to those pitching numbers before he was traded to the Dodgers. But slotting him behind Cole Hamels again would strengthen the top of the rotation, pushing Moore, Martin Perez and Fister to where they’re better suited.

Maybe Daniels and the Rangers are hesitant to take a big swing after whiffing on signing Choo and trading for Prince Fielder. And as with many other teams in MLB, there are concerns about exceeding the luxury tax threshold. But the Rangers have an opportunity to make the playoffs, rather than tread water at the 80-win level with the rest of the competition in the AL.

Alex Putterman: I would tell Minnesota Twins front-office honchos Derek Falvey and Thad Levine to jump into the free-agent market and push hard for a return trip to the playoffs.

Entering this offseason, there was good reason for the Twins to be patient. Though they snagged a wild-card spot last year, they finished 17 games behind the Indians in the AL Central and figured to remain sizable underdogs heading into 2018. The logical move was to continue developing young players while waiting another year or two to add veterans.

But the sluggish offseason should change that calculation. As free agents drop their asking prices, teams like the Twins should pounce on potential bargains. Minnesota is currently projected for 81 wins next season, meaning they’re at the part of the win curve where a couple signings could make a substantial difference. The Central is the AL’s weakest division, and an easy schedule could help the Twins vault back into the wild-card race, which is one Mike Trout injury away from chaos. Even if Minnesota won’t win 95 wins, there’s no shame in trying to win 88.

Maybe the Twins won’t pursue A-list free agents, but given that they ran a payroll of $143 million in 2017 and are at only $97 million in commitments for 2018, they could surely afford, say, Alex Cobb or Carlos Gonzalez or Carlos Gomez or Melky Cabrera or Greg Holland or some combination thereof. Now is the time to go for it.

Matt Clapp: I’d tell Baltimore Orioles general manager Dan Duquette to be aggressive in trying to trade Manny Machado right now. And I’d also tell owner Peter Angelos to actually let the New York Yankees be able to trade for him. Sure, the Yankees are in the division and you don’t want to keep strengthening that powerhouse, but we’re talking a one-year deal and the Orioles should be doing everything they can to improve their own organization going forward. Baltimore should only be worried about themselves here and accelerating their rebuild.

There are a few explanations for the Orioles not dealing Machado yet.

1. They’re telling themselves they can be competitive and want to try to make one last run with Machado. You never know in baseball, as we saw with teams like the Brewers and Rockies last year, but FanGraphs currently projects the Orioles to win 72 games for the sixth-worst record in baseball. The Orioles making the playoffs is an extreme longshot.

2. They want to put butts in the seats at Camden Yards. Machado is one of the best talents in baseball and a blast to watch. But this shouldn’t at all outweigh doing what’s best for improving their organization.

3. The Orioles may still have some hope in keeping Machado long term and want to show their loyalty to him. That’s neat and all, but he’d surely understand that the team is rebuilding, and that this all doesn’t prevent them from still working out a deal next offseason if they want to. They can maintain a good relationship still, and he may even appreciate being traded to a contender for this season.

4. They want Machado to build value back up after a down 2017 season, and perhaps show off to teams that he can handle shortstop. That would be understandable, but it’s unlikely teams in trade negotiations would treat him as anything but the 6-WAR kind of superstar he’s been. They know he’s an elite third baseman and can probably be plenty passable at shortstop for one year. It’s hard to imagine trade offers getting much better for him in July than now. He can make a 5+ win impact on a team over a full year but it may not be substantial over half a season. So, it seems unlikely trade offers would be much better in July. And if he were to play more like he did in 2017 than his previous seasons, that would only lower his trade value.

So, when you add everything up, it makes little sense for the Orioles to not just look hard into dealing Machado immediately. They need to accept what they are and begin their rebuild, which could take a lot of work to catch up to the Yankees and Red Sox.

Andrew Bucholtz: My advice would be for Angels’ GM Billy Eppler, and it’s “Don’t stop now.” Lots has been written about the Angels’ push to try to win this year, and the last year-plus has seen them add Andrelton Simmons, Zack Cozart, Ian Kinsler and Justin Upton, in addition to Shohei Ohtani. But there are still a few issues; catcher Martin Maldonado isn’t much of a hitter, the starting rotation is more good than great, and there are big age worries about everyone from Kinsler to Cozart to Albert Pujols. And given the slowness in the free agent market and the amount of teams clearly not trying to win in 2018, this feels like a moment where there’s value to be had.

In particular, what about going after another top pitcher? The Angels have already signed two of the top 10 free agents, per CBS’ latest rankings, in Ohtani and Cozart, but there are four promising unsigned pitchers in that Top 10: Yu Darvish, Jake Arrieta, Lance Lynn and Alex Cobb, and they’re all either 30 or 31, so they may have a few years left. The Angels could also try to add some positional depth in case a couple of their starters underperform thanks to age.

Yes, Eppler doesn’t have final say over the budget, but he’s already convinced owner Arte Moreno that it’s worth making a couple of big signings. And it’s much more worth it to really go all in in hopes of winning a World Series then to push a few chips in and hope to make the playoffs. Now looks like the time for the Angels, especially while they have Mike Trout and Ohtani. It’s not easy to get over the hump from decent to great, but Eppler’s already off to a strong start this offseason. He just shouldn’t stop there.