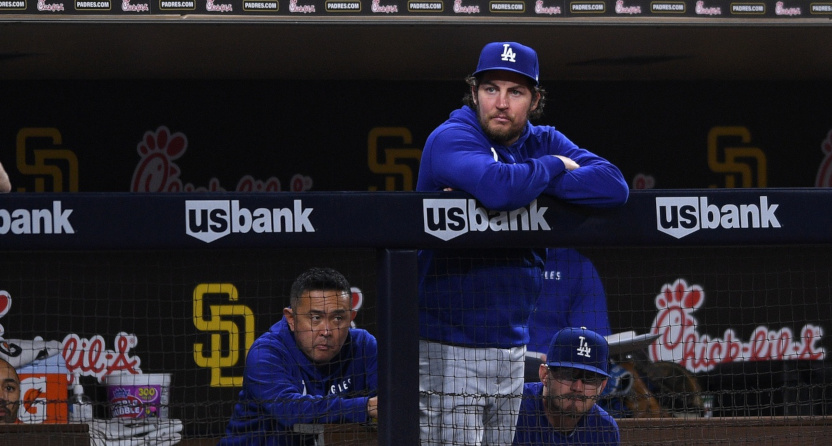 As TMZ first reported Tuesday night, Los Angeles Dodgers’ pitcher Trevor Bauer (seen above on June 22) is under police investigation after a woman claimed he assaulted her on two occasions earlier this year. Brittany Ghiroli and Katie Strang of The Athletic have now obtained a 67-page domestic violence restraining order request the woman filed against Bauer, executed on Saturday (June 28). That restraining order request includes photos, which Ghiroli and Strang describe with “the woman’s face is visibly bruised and swollen, including under both of her eyes. She also has a swollen jaw, bloodied lip and scratches to the side of her face.”

Reached by The Athletic on Wednesday, and presented with a request for comment regarding the ex-parte document, Bauer’s camp declined further comment, and deferred to the statement made on Tuesday night by Bauer’s agent, Jon Fetterolf.

That statement reads: “Mr. Bauer had a brief and wholly consensual sexual relationship initiated by [the woman] beginning in April 2021. We have messages that show [her] repeatedly asking for ‘rough’ sexual encounters involving requests to be ‘choked out’ and slapped in the face.

“In both of their encounters, [the woman] drove from San Diego to Mr. Bauer’s residence in Pasadena, Calif. where she went on to dictate what she wanted from him sexually and he did what was asked. Following each of her only two meetings with Mr. Bauer, [the woman] spent the night and left without incident, continuing to message Mr. Bauer with friendly and flirtatious banter. In the days following their second and final encounter, [the woman] shared photos of herself and indicated that she had sought medical care for a concussion. Mr. Bauer responded with concern and confusion, and [the woman] was neither angry nor accusatory.

“Mr. Bauer and [the woman] have not corresponded in over a month and have not seen each other in over six weeks. Her basis for filing a protection order is nonexistent, fraudulent, and deliberately omits key facts, information, and her own relevant communications. Any allegations that the pair’s encounters were not 100% consensual are baseless, defamatory, and will be refuted to the fullest extent of the law.”

Bryan Freedman, the woman’s attorney, said Wednesday in a statement to The Athletic: “Without going into detail for the benefit of both my client and Mr. Bauer, the pictures evidencing the unconsented abuse do not lie. Any suggestion that she was not the victim of assault is not only false and defamatory but, in fact, perpetuates the abuse. Our client truly wants Mr. Bauer to engage in a medically appropriate therapeutic process where he can receive the treatment he needs to never act this way again. If he is willing to meaningfully participate in a process directed by appropriate professionals, it will go a long way toward allowing her to feel safe and resolving this matter. But, regardless, she cannot allow this to happen unknowingly to anyone else.”

…“We anticipate there will be criminal action against Mr. Bauer and it is our hope law enforcement will take our client’s allegations and case seriously,” the woman’s lawyer, Marc Garelick, said in a statement.

These are extremely serious allegations against Bauer. As noted in the piece, a Pasadena police department spokesperson confirmed they have an active investigation into this. As for the Dodgers and MLB, their response so far has been limited, but it does seem to have escalated to an actual league investigation (versus Tuesday’s comment of “looking into this”).

The Dodgers said in a statement they were made aware of the allegations against Bauer on Tuesday afternoon and “take any allegations of this nature very seriously.” The statement also says the Dodgers immediately contacted Major League Baseball, which will be investigating the matter, and that the team had no further comment.

We’ll see where this goes from here.