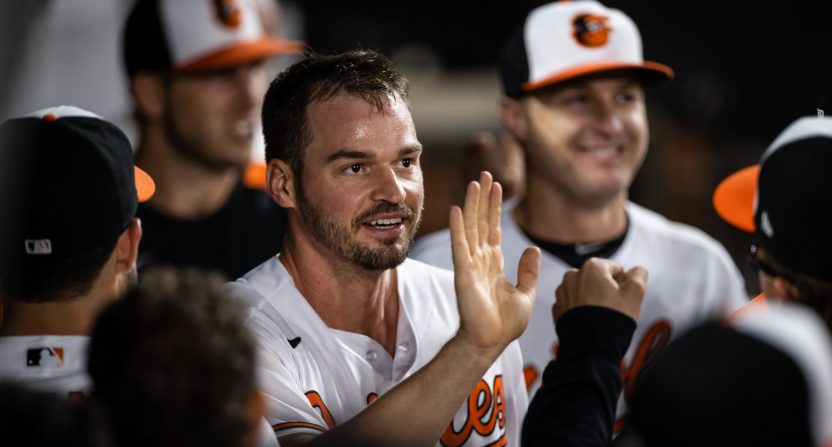 One of the more remarkable MLB stories in recent years is that of Trey Mancini. He’s now on the move from the Baltimore Orioles to the Houston Astros as part of a three-team trade (also involving the Tampa Bay Rays) ahead of Tuesday’s MLB trade deadline:

Orioles are trading Trey Mancini to the Astros. Sources.

Mancini (seen at center above celebrating a home run last September) was originally selected in the eighth round of the 2013 MLB Draft by the Orioles out of the University of Notre Dame. He made his MLB debut for the Orioles in September 2016, and played at the major league level for them through 2019, but then had to miss the entire 2020 season while battling cancer. Mancini returned to their lineup in 2021, though, and was named the American League Comeback Player of the Year in 2021 after hitting 255/.326/.432 that season (and pushing through another cancer scare). He’s put up another solid season this year, hitting .268/.347/.404 through Sunday. Most of his games have come as a designated hitter, but he’s also played first base and in the outfield.

This move sees Mancini go from the 51-51 Orioles (who were, however, just three games out of a wild card playoff berth) to the 67-36 Astros, who are 12 games clear at the top of the AL West. So this certainly enhances the chances he’ll play in the postseason this year. However, the baseball world certainly had mixed reactions to seeing a player so connected to the Orioles sent on to the Astros. Here’s a sampling of that:

But this deal smells like a clear sign of intent, a cold-hearted, ruthlessly “correct” calculation of sorts.

Sad to see Trey Mancini go. Interviewed him in ‘19 and he talked about wanting to be in Baltimore during the hard times so he could enjoy their run on top even more. Just as that window opens, he’s a piece that helps them get even closer. Winning in Baltimore mattered to him.

on the one hand: good for Trey Mancini, good guy gets to go to the playoffs

on the other hand: the idea of Trey Mancini, Astro, makes me want to stab out my eyes with cocktail picks so, you know, tradeoff

And the move seemed tough for Mancini as well:

Trey Mancini was in somewhat of a daze as he spoke with reporters just now. He said the Orioles’ training staff was among his hardest goodbyes: “These are guys who I credit with saving my life two years ago.”

Trey Mancini: “I always said I wanted to see the rebuild through and I feel like, in a lot of ways, I have. I think things are only going to get better here, and besides when I'm playing against them, I'm always gonna be rooting for these guys in here.”

Mancini spoke to the media. Said it’s hard to put into words his relationship with this team, org and fans. Says he is excited to come back in Sept with the Astros. Been very emotional for him. Especially saying goodbye to the athletic training staff that helped save his life.

It is interesting that one of Mancini’s last at-bats for the Orioles was a ridiculous inside-the-park home run Thursday. We’ll see what he does with the Astros.