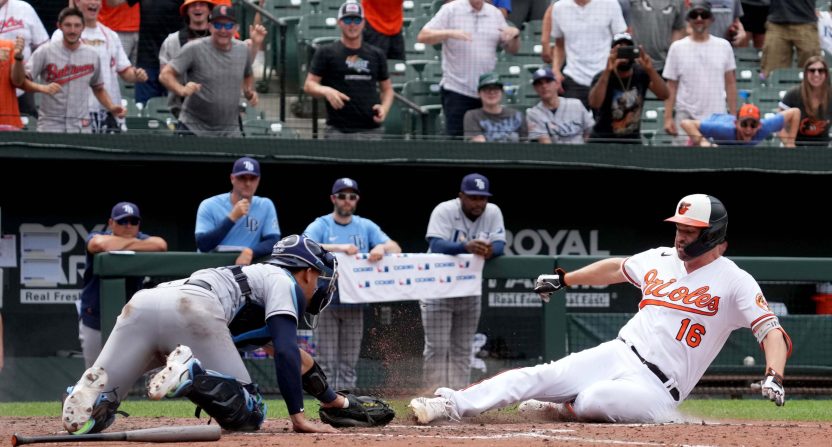 As a cancer survivor, Trey Mancini has earned the respect of baseball fans everywhere. That especially includes fans of Mancini’s team, the Baltimore Orioles. And it what might have been his final at-bat as an Oriole, Mancini gave those fans in Baltimore a lasting memory.

With Baltimore clinging to a 1-0 lead over the Tampa Bay Rays, Mancini came to the plate with one out and a runner on base in the eighth inning. He hit a ball to right field that appeared to be nothing more than a harmless flyout. Only, as the saying goes, there’s nothing routine about a routine fly ball.

Tampa right fielder Josh Lowe struggled to locate the ball in the sun. It ended up landing right on his face and bouncing hard towards the right field line. Austin Hays scored easily from second base. Centerfielder Roman Quinn sprinted to retrieve the ball as Mancini — not known for his speed — sprinted around the bases. Quinn’s throw was up the line, which allowed Mancini to slide in safely at home, beating the tag of René Pinto.

Despite the misplay, it was ruled as an inside-the-park home run.

While the Orioles have enjoyed a recent resurgence, Mancini has remained in trade talks. As Thursday marked Baltimore’s final home game before the Aug. 2 trade deadline, the inside-the-park home run could well be Mancini’s final home at-bat with the team.

That significance was not lost on the MLB world watching the game.

Listen, the Orioles absolutely should not trade Trey Mancini. It’s absolutely not worth it.

An inside the park home run for Trey Mancini in what could be his final at-bat at Camden Yards. WOW 🤯pic.twitter.com/aetZNEm2fl

The most exciting of almost 3,000 Trey Mancini plate appearances as a Baltimore Oriole might have been the last.pic.twitter.com/inOaiNCZuu

How can you not be romantic about baseball?

This could be Trey Mancini’s last game home as an Oriole and he does this. Beautiful 🥲 pic.twitter.com/d276jiWXbo

In what might be his final home game with the Orioles, Trey Mancini hits an inside the park home run.

YOU CAN'T MAKE THIS STUFF UP!!! https://t.co/GcCmo9IcUJ

The home run was significant for another reason. Thursday marked the second anniversary of the death of Mo Gaba, a devoted Baltimore sports fan who battled cancer for nearly his entire life before ultimately passing away at the age of 14. The Orioles honored Gaba by making Thursday Mo Gaba Day. Gaba’s mother, Sonsy, threw out the ceremonial first pitch, with Mancini catching it.

Some moments just seem like they’re aligned and meant to happen a certain way. This was one of those for so many reasons.

"The thing is — and I appreciate this about Aaron — it’s just the urgency to get some of this stuff corrected."

"The thing is — and I appreciate this about Aaron — it’s just the urgency to get some of this stuff corrected."