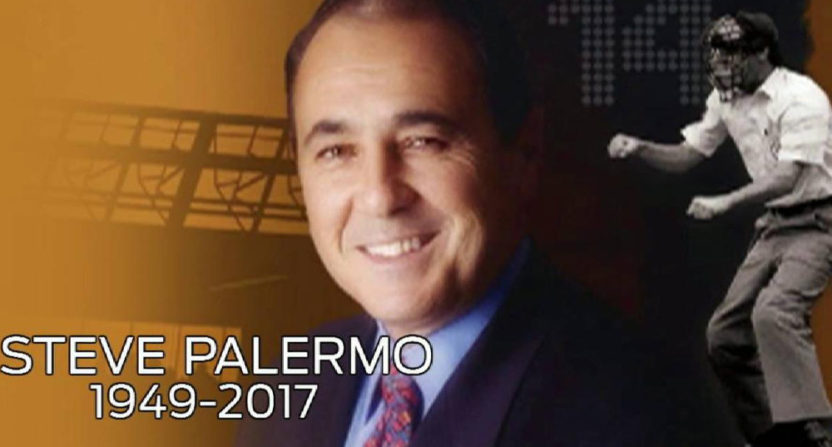 Former MLB umpire Steve Palermo died at 67 Sunday following a battle with cancer, and he unquestionably left his mark on the league. Palermo was a prominent official who made the majors in 1976 and appeared headed for the Hall of Fame, but had his umpiring career cut tragically short when he was shot and initially paralyzed from the waist down trying to stop a mugger at a Dallas restaurant in July 1991. He was told he wouldn’t walk again, but made it to the mound with a cane to throw the first pitch in that year’s World Series, and went on to become a MLB umpire supervisor in 2000, work behind the scenes on countless initiatives, and raise millions for the National Paralysis Foundation. Tons of tributes poured in for him Sunday, but one of the best is this story from Joe Posnanski of MLB.com. It’s a story about the Yankees-Red Sox playoff game in 1978, famous for the “Bucky Bleepin’ Dent” home run, which Palermo had to run down the line and call fair, much to the chagrin of his father:

Stevie was working third base during the 1978 American League East single-game playoff between the Red Sox and the Yankees. Palermo, as mentioned, had grown up in nearby Worcester. He grew up in a Red Sox family; heck his Sawx lineage went back more or less to the days the Sawx traded Babe Ruth to the Yankees.

Well, you know the story of that game. Sox led 2-0 going into the seventh, and the Yankees’ Bucky Dent — no power Bucky Dent, choking-up-5-inches-on-the-bat Bucky Dent — popped a three-run homer over the Green Monster in left. Steve Palermo was the umpire who called it a fair ball and made the home run sign.

Not long after, Stevie saw his father Vincent. Stevie noticed his Dad acting cold toward him.

“What,” Vincent blurted out, “you couldn’t have called that ball foul?”

At which point Vincent Palermo said the one word that made Stevie and I crack up every day. He said: “So?”

Now that’s an umpiring story par excellence. And there were plenty of other great tributes to Palermo, including this one from Hall of Famer and Royals’ vice-president of baseball operations George Brett to Ben Walker of the Associated Press:

“I remember when he came up,” Hall of Famer George Brett said at the Orioles-Royals game. “Obviously, it didn’t take him long to be respected as one of the finest umpires in the game.

“At the time of his unfortunate shooting in Dallas, trying to save some girl, he was definitely regarded as probably the best umpire in baseball. It’s very sad,” he said.

…And Brett pointed out, Palermo could be pretty animated, too.

“You can get on YouTube and pull up Steve Palermo and arguments and Earl Weaver has a couple of really good ones with him,” he said.

“It’s kind of ironic we’re playing the Orioles today. Earl is no longer with us and neither is Stevie and right now they’re probably having another one up in heaven.”

Palermo was a legend in umpiring circles, and his perseverance to come back after that shooting and still make an impact on baseball was incredibly impressive. He told Posnanski he’d still make the same decision to try and help even knowing the consequences, too, which is a testament to his heart. Our thoughts are with his friends and family.