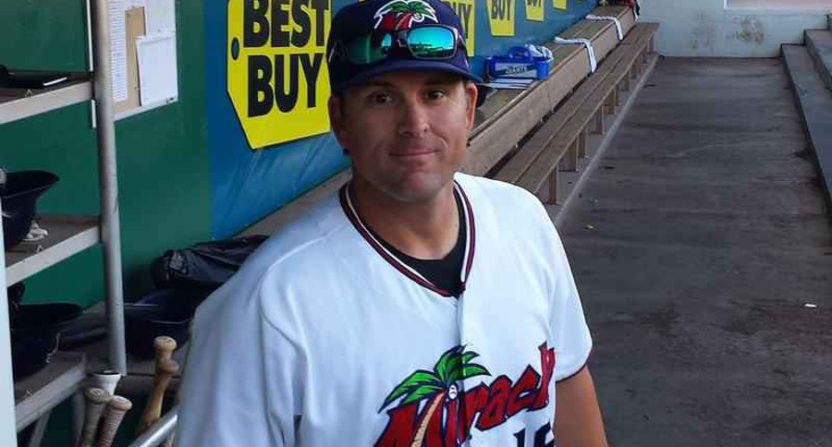 A Major League Baseball team one of its firing its minor league managers isn’t an uncommon occurrence, but doing so while he’s in the middle of hurricane cleanup, and six weeks after you offered him a coveted Arizona Fall League managerial spot that he only turned down because his wife was undergoing heart surgery? That’s a little more unusual, and much more problematic.

But it’s allegedly what happened with the Minnesota Twins’ firing of Doug Mientkiewicz, manager of their high-A Fort Myers Miracle affiliate in southwest Florida. Mientkiewicz told Phil Miller of the Minneapolis-Star Tribune he got the news Friday while he was dealing with the damage Hurricane Irma caused to his home and neighborhood in the Florida Keys:

“I’ve been cutting down trees up and down the block, cleaning up after the hurricane, and watching the National Guard go up and down the street. My cellphone was out for several days, and then I got a call today,” said Mientkiewicz, known throughout the organization as “Dougie Baseball” for his intensity about the game. “I’m out here working my rear end off, dealing with the remnants of the hurricane, and they call to tell me I’m fired. You think they will ever do something professional as an organization?”

Mientkiewicz also complained about getting the news not from general manager Thad Levine or chief baseball officer Derek Falvey, but rather Brad Steil, the team’s director of minor league operations, and about Steil declining to tell him why he was fired or who made the decision. For his part, though, Levine said the Twins were trying to give employees they were parting ways with as much notice as possible so they could try to catch on with other teams.

That makes some sense. Even though calling in the wake of a hurricane seems like bad form, if the team had already decided to part ways with Mientkiewicz, it wouldn’t necessarily be any better if they’d done it a week or two weeks later. What’s curious is how they wouldn’t tell him why he was fired, though, and also how they went from seemingly wanting to give him more opportunities to deciding to part ways with him in less than two months. Star-Tribune columnist Jim Souhan has more on the organization’s apparent about-face:

In the wake of the Twins firing Doug as their Class A manager, I’ve been in touch with [his wife] Jodi. She didn’t want to be quoted directly but did tell me this:

Six weeks ago, the Twins asked Doug to manage their Arizona Fall League team. That’s usually a compliment, and often a sign that the manager has a future in the organization.

Doug turned it down because Jodi was due to have heart surgery.

I’ve also been told by multiple sources that Doug has received condolences and expressions of anger from many in the Twins organization. Doug was very popular with his former teammates and players in the organization. He was ambitious, but that’s no crime.

That’s certainly an odd decision; Mientkiewicz would seem more than justified in declining extra work with his wife set for heart surgery, and the offer of that extra work would seem to indicate the team wanted him around. It makes you wonder what changed, and while there may be more to this from the Twins’ side, they’re not saying anything about why they made the move.

However, some major-league players who recently played for Mientkiewicz are already upset about it, as Mike Berardino of the St. Paul Pioneer Press writes:

Like so many players in the Twins’ clubhouse, Byron Buxton was disappointed to hear the news of Doug Mientkiewicz’s firing after five seasons managing in the minor-league system.

Buxton played for the old-school skipper from 2013-15 at both Class A Fort Myers and Double-A Chattanooga.

…“He wasn’t just a coach to most players,” Buxton said. “He was more of a brother to us. He fit in. He’d tell us all the time: ‘Y’all can text me anytime of night. It doesn’t have to be about baseball. It can be about life.’ “

…Rookie outfielder Zack Granite was named Twins minor league player of the year in 2016 after stealing 56 bases and improving across the board with Mientkiewicz’s Lookouts.

“Honestly, he was the guy that took me from an OK player to the next level,” Granite said. “He turned me into a hitter, taught me how to drive the ball. That’s what changed my game. I have nothing but respect for that guy. He’s the hardest worker I’ve seen.”

With testimonials like that and a good reputation around the game, it does seem likely Mientkiewicz will catch on elsewhere. The 43-year-old had a strong MLB career as a first baseman, playing for seven MLB teams from 1998-2009, and he’s since done well as a coach and manager, working first as a hitting coach in the Dodgers’ organization in 2012 and then being hired by the Twins to manage the Miracle later that year. He found solid success there, and was interviewed for the Twins’ major league managing job in 2014 (they eventually chose Paul Molitor), then managed their double-A team in Chattanooga in 2015 and 2016 before returning to Fort Myers.

So, Mientkiewicz will probably get a look with another team. But it’s curious that the Twins, the team that drafted him in 1995, the team he spent most of his pro baseball career with (he was in their organization from 1995 to 1998, then at the major-league level with them through 2004), and the team that until recently seemed high on him, would suddenly part ways with him this way. It’s earning them a lot of criticism, and at least from the outside, it isn’t a good look.