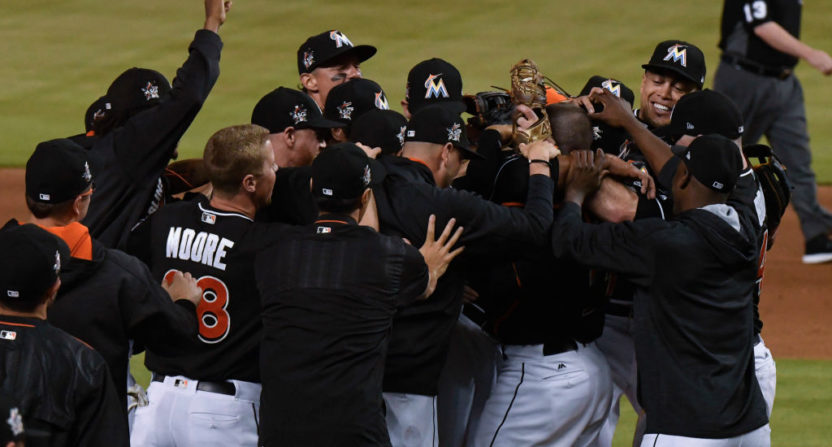 A no-hitter is once of the most dominant performances in all of sports. (Unless you’re Edwin Jackson, in which case seven years later I’m still trying to comprehend how he made it all the way through that performance with eight walks.) We got our first such awe-inspiring performance of the season from Miami Marlins hurler Edinson Volquez earlier this week.

That got Twitter data editor Elaine Filadelfo interested in the infamous no-hitter jinx, where talking about a pitcher’s potential no-no means he will give up a hit. I’ve got some bad news for superstitious baseball fans. According to a new study by Twitter, the jinx does not exist.

Before the world of social media, it would have been impossible to conduct a survey like this, unless you wanted to limit it to only broadcasters. But Twitter looked back through tweets during no-hit bids (defined in the study as a no-hitter through at least six innings) from the 2015 season to “explore the relationship between the number of Tweets mentioning a no-hitter in progress, and whether the no-hitter was successfully completed.” That gave them 41 games to explore, including seven actual no-hitters.

Here’s how they went about the survey:

Looking at volume level from the entire game time will include Tweets that either celebrate a successful no-hitter or react to it getting broken up. To remove those surges and to standardize the time period for each game, we opted to focus on the amount of Tweets in approximately the first seven innings of the game. We measured the number of no-hitter Tweets from start-of-game through 40 minutes before final pitch for a broken-up no-hitter (in 2015, the average MLB game was around 3 hours, which means that each inning lasts approx. 20 minutes) and 32 minutes for a completed no-hitter (average no-hitter game time was 2:31). 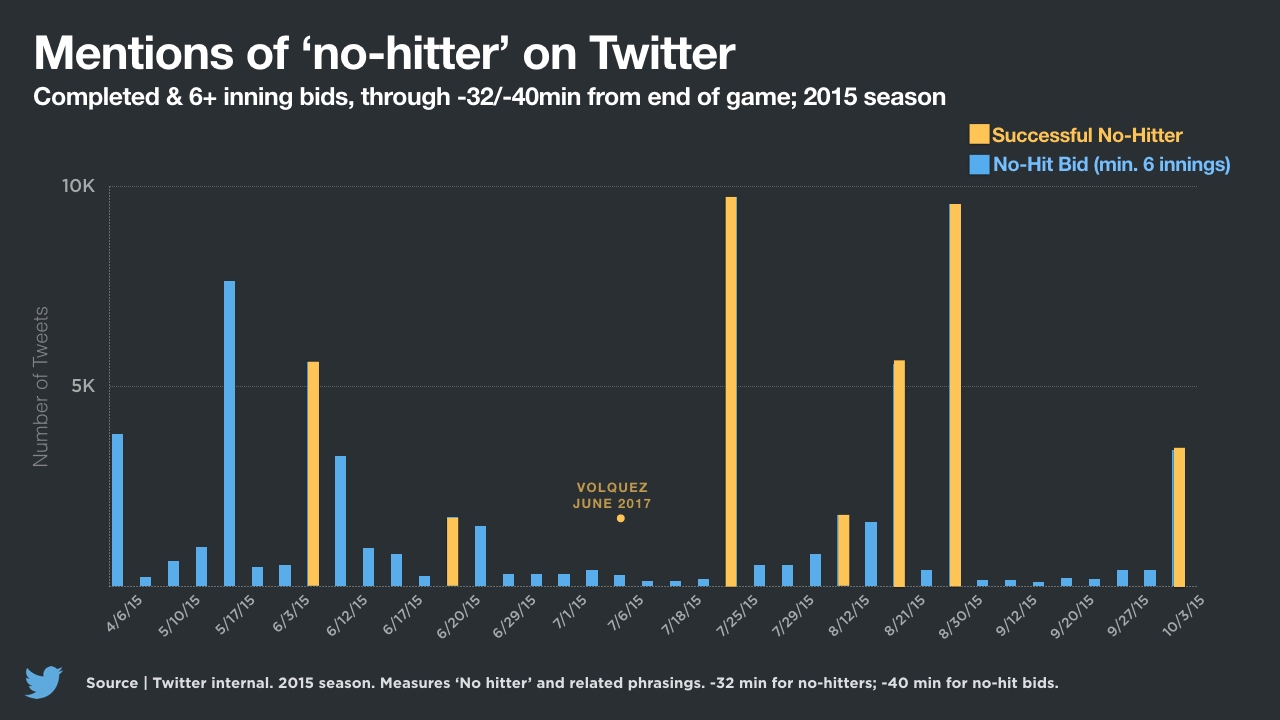 Here you can see the comparison between two of Max Scherzer’s no-hit bids from the 2015 season, one of which turned into a complete no-no and a second that got broken up in the eighth inning. Up until the end of the sixth inning, there was plenty more Twitter chatter about the one that turned into an actual no-hitter. 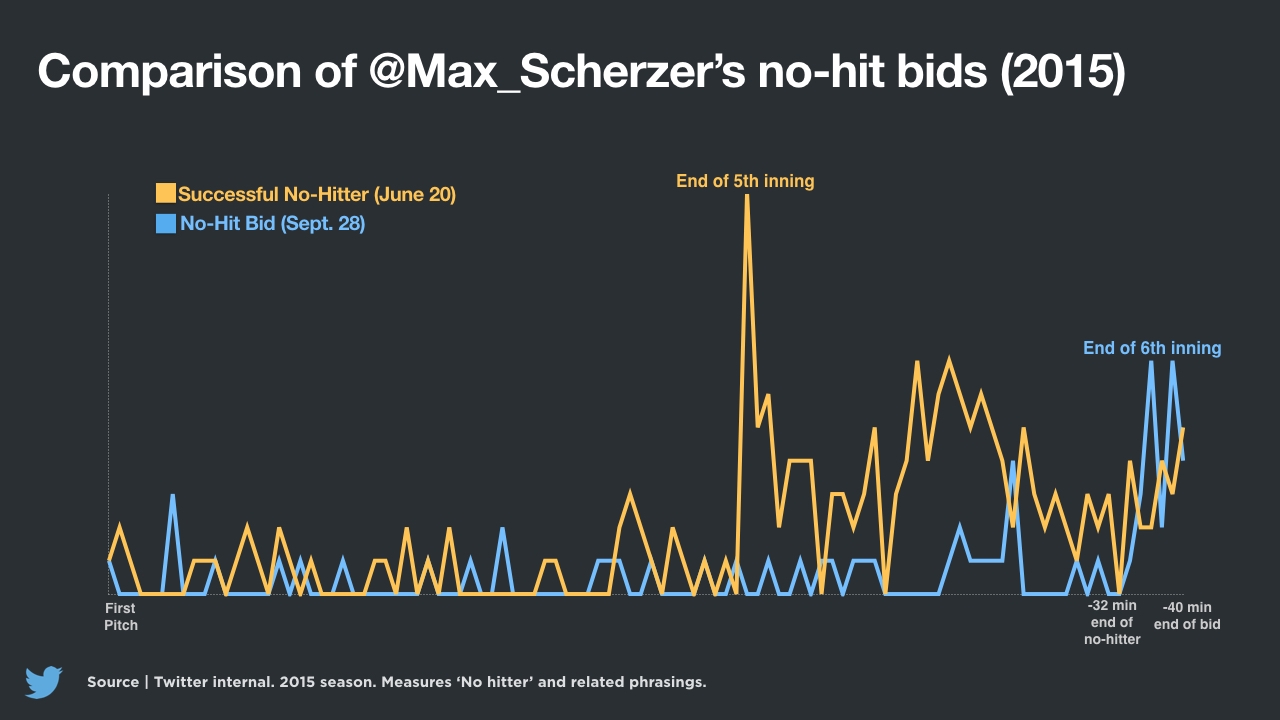 Here’s how Twitter zeroed in on studying if the so-called jinx actually existed:

Now it’s time to zero in on the potential jinx. First, we checked how many Tweets mention “no hitter” on an average in-season day in 2015 (excluding days that saw a no-hitter or bid): around 700. Games that had a no-hitter into the 7th, but did not end as a no-hitter, saw around 2,500 Tweets in the -30min window. And no-hitters? Those had over 5,000 Tweets in the -32min window. 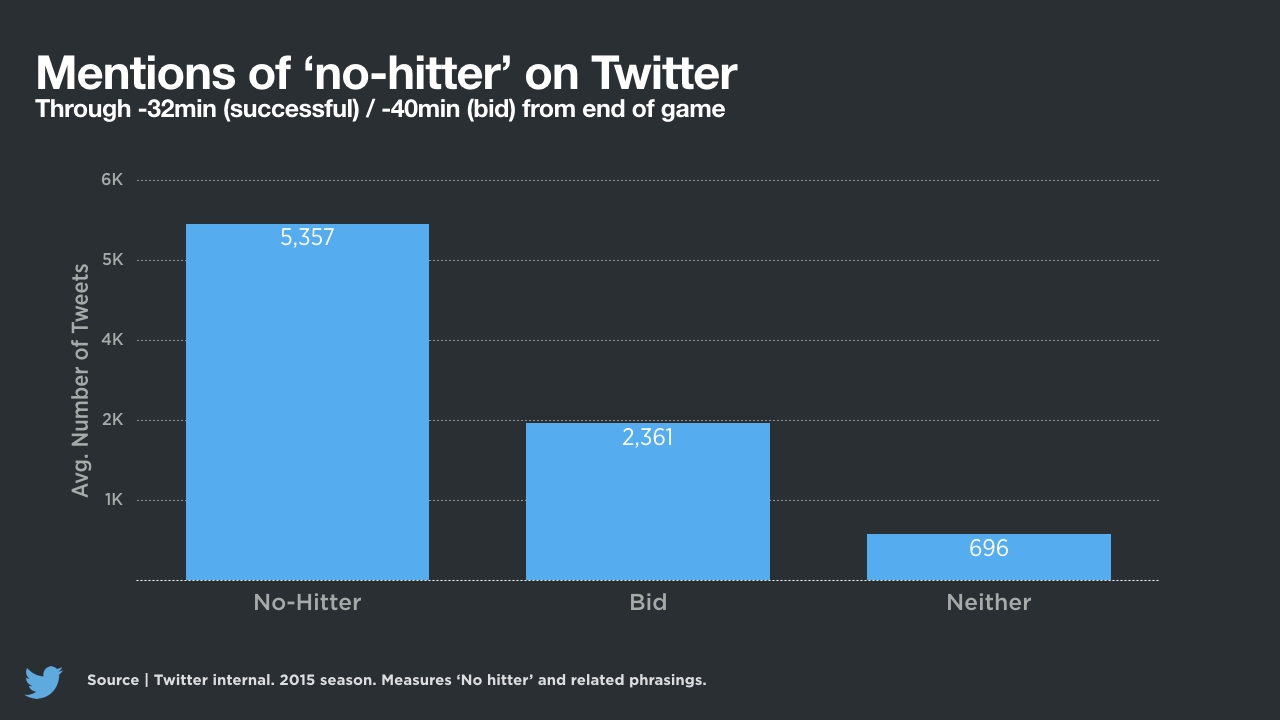 As the graph shows, there are well over twice as many tweets about no-hitters during successful ones than during bids that get broken up. If anything, maybe you have to tweet about a no-hitter in order to make it happen.

But we don’t want to get too crazy here.