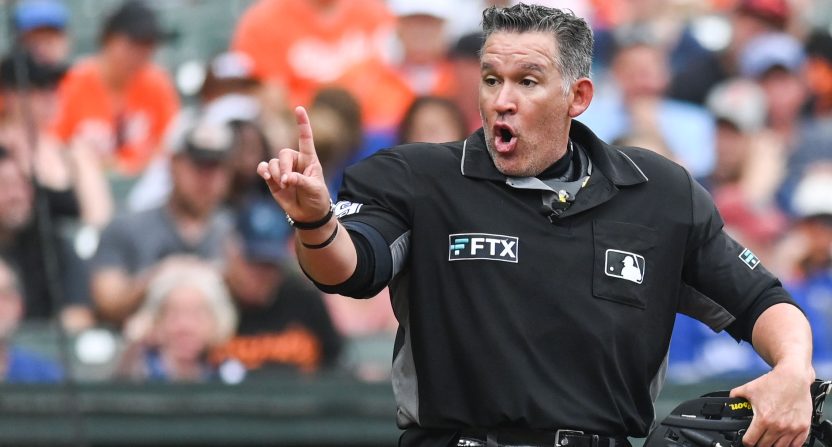 Another day of Major League Baseball games, another performance by a home plate umpire that can best be described as disconcerting.

Manny Gonzalez was behind the plate on Monday during the Baltimore Orioles doubleheader against the Toronto Blue Jays. Pretty much all day long during the first game, fans were perplexed and angered by his balls and strike calls, which seemed to defy logic and common decency.

There have been several iffy calls today from home plate umpire Manny Gonzalez, but this strike three to Ryan Mountcastle has the best case for the Orioles' irritation pic.twitter.com/ipq51NuZz2

Called out on strikes on that 7th pitch below the zone. Awful, awful work being done by Manny Gonzalez in this game. #Birdland #NextLevel pic.twitter.com/DtKRzODCAq

Here are the strike and ball calls on both teams through eight innings.

Toronto batters are the first image, Orioles the second pic.twitter.com/pk1tOiRMN9

The Blue Jays ended up winning the game 7-3. But it seemed like all any fans wanted to discuss was the miserable day behind the plate for Gonzalez. While he hasn’t developed the reputation that someone like Angel Hernandez has, Gonzalez is certainly putting himself in that kind of company with his performance on Monday.

Manny Gonzalez may be the only umpire worse than Angel Hernandez. At least today but he is absolutely terrible

Manny Gonzalez, YOU have had your application accepted into the MD school of the blind.

Wow, Manny Gonzalez making a legit bid for the worst plate game of the season. #BlueJays

The worst part of this horrible strike zone by Manny Gonzalez is that he won't even be held accountable for it. #Orioles #BlueJays #MLB

Those who watched the game are very eager to see the Ump Card for Gonzalez soon, and it is not going to be very pretty.

It’s been a pretty wild year for MLB umpires and bad calls. It really does feel like every day there’s a new indefensible call that comes up and leads to anger or ejections. There are a lot of people around MLB that can’t wait for robot umpires to get here and call pitches, which sure sounds like could happen relatively soon.