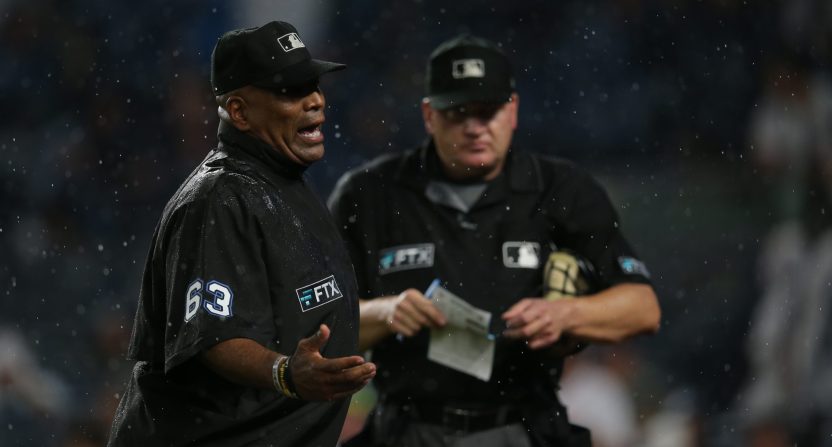 The 2022 season has not been great for MLB Umpires. Bad calls are becoming more noticeable and the calls for robot umpires are getting louder. And at least one umpire decided to fight back.

Former MLB player Will Middlebrooks recently spoke about the ongoing issue with umpires. He was frustrated in some aspects, citing an overall lack of accountability and incentive to get better. But he also pointed out that “it a very hard job” and asked a great question, “why does everyone else in the world have access to see whether it’s a ball or a strike except for the one guy that needs to know?” One could even argue that question is a defense of umpires. Veteran umpire Laz Díaz did not take it that way.

Díaz commented. And while Middlebrooks never mentioned anything about umpires hindering his own career, that’s the road Díaz took in his response.

MLB fans were quick to criticize Díaz for his defensive and off base reaction.

This is exactly what we’ve been screaming about for years. Stop making it about you! Just do your job correctly. https://t.co/twBsJSrxGi

Bring on the robots. Umps don’t deserve to have jobs https://t.co/26ZkK5y62V

This has to blow up. No way one of the worst umps in the business is going after Will for speaking the truth!?! @middlebrooks https://t.co/7bhRnVUJJr

MLB umpires attacking members of the media for calling them out for having zero accountability for being bad at their jobs. The ump show rolls on https://t.co/CzQ5fzuIWH

Will Middlebrooks made it to the biggest stage of his profession and put up a 122 wRC+ and 2.0 fWAR in his rookie season.

Laz Diaz made it to the biggest stage of his profession, missed 17 calls in one game earlier this year, and was not penalized.pic.twitter.com/7GdQNGH4Yd https://t.co/OwvAOtcVHp

But perhaps the greatest argument came from another former player, Trevor Plouffe. He pointed out that while Díaz was trying to defend umpires, he actually made Middlebrooks’ point.

Laz Diaz points out the biggest flaw in MLB umpiring and he didn’t mean to. Players are held responsible for their careers, regardless of injury or just playing poorly. If you don’t perform, you’re gone. Umpires aren’t held to that standard and it’s been showing a lot recently. https://t.co/k7GfFyBWql

That’s hard to argue with.

The most you can say about Middlebrooks is that his career might have been extended for an extra year or two because of the hype he had coming in. But overall, Middlebrooks did have a disappointing MLB career — which ended before he turned 30.

As Middlebrooks and Plouffe both noted, bad players do not last long in the majors. Bad umpires are held to no such standard. Until that changes, the frustration will only mount, regardless of how defensive an umpire might be.

[Will Middlebrooks, Wake and Rake Podcast]