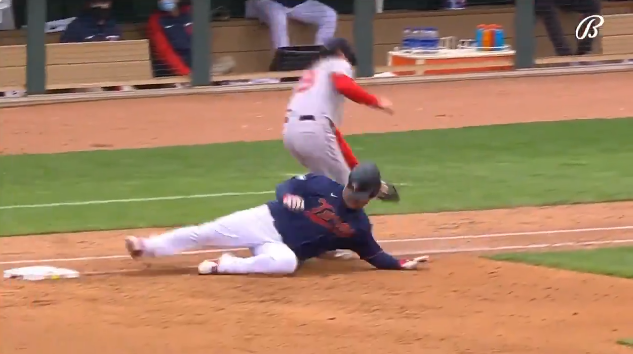 Willians Astudillo is a great reminder that baseball players come in all shapes and sizes.

On Tuesday, the Minnesota Twins’ 5’9″, 225-pound utility man (he’s already played catcher, first base, second base, and third base this season) reached base on a routine groundball to shortstop. Boston Red Sox shortstop Xavier Bogaerts was a bit off target with his throw, and Astudillo made an awesome slide to avoid the tag attempt from first baseman Bobby Dalbec.

Willians Astudillo is the greatest baseball player who has ever lived pic.twitter.com/4Swp9p6RGx

And here Astudillo is chasing after a foul ball into the infield netting:

Willians Astudillo, hat in hand, in the snow, chasing after a foul ball.

A work of art. 🎨 pic.twitter.com/xHACPbnDx0

Wholesome content. “La Tortuga” is an incredible athlete that also entered the game with a career .301 batting average.

Unfortunately, Astudillo’s efforts on the basepaths weren’t enough for the Twins in this one. Boston came away with a 4-2 victory. La