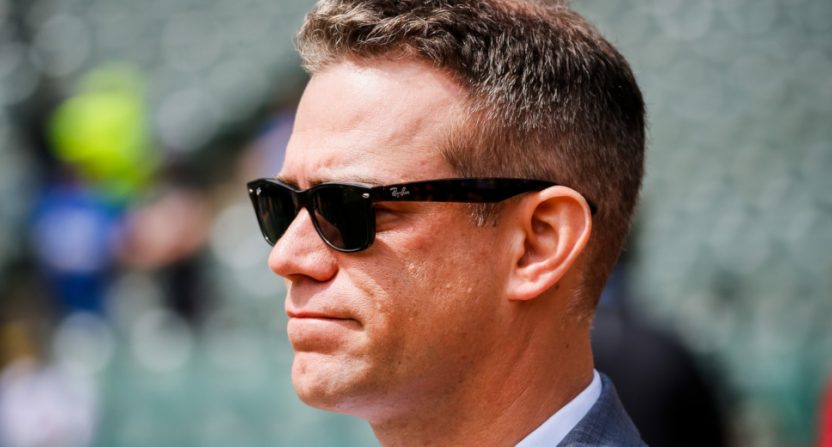 The USA Today Twitter account is having quite the week. Earlier this week, they were roasted for a graphic on the “non-essentials” people spend money on, including “personal grooming” and “rideshares,” And on Thursday, they promoted a mostly-fine-otherwise story about the Cubs’ fan banned for life from Wrigley Field after making a racist gesture on camera by saying the fan’s name was…Theo Epstein.

Epstein (seen above) is the Cubs’ president of baseball operations, and his comments (the linked team statement in question came later from Cubs’ president of business operations Crane Kenney) were quoted high up in the piece. So it seems likely that whoever was promoting the story on Twitter didn’t read it, and just pulled Epstein’s name out. (The fan in question wasn’t publicly identified in the story.) USA Today has since deleted the tweet, but the internet sure noticed:

Tweet of the day. @USATODAY says the @Cubs banned their general manager, Theo Epstein, from Wrigley for a racist gesture. Actually, it was Epstein SAYING the Cubs banned a fan for the gesture. Uhhhh… #MLB pic.twitter.com/wcWrQADh93

Everyone needs an editor, including the social media desk.
⁦@USATODAY⁩ tweet says @Cubs President Theo Epstein has been banned from Wrigley Field for flashing a racist gesture, when in fact Epstein has issued a statement condemning the unnamed fan who made the gesture. pic.twitter.com/EMZdXblOxW

Big news if true from the @USATODAY pic.twitter.com/OfggZcXWa8

As Sports Illustrated‘s NHL account learned earlier this week, it’s definitely worth being careful with names on Twitter. But mixing up Bruins’ defenseman Charlie McAvoy and musician Charlie McCoy is an order of magnitude less severe than saying Theo Epstein was banned from Wrigley Field for a racist gesture. That’s a pretty bad mistake for USA Today. Maybe they decided that social media editors who actually read the pieces they’re tweeting about were “non-essentials.”