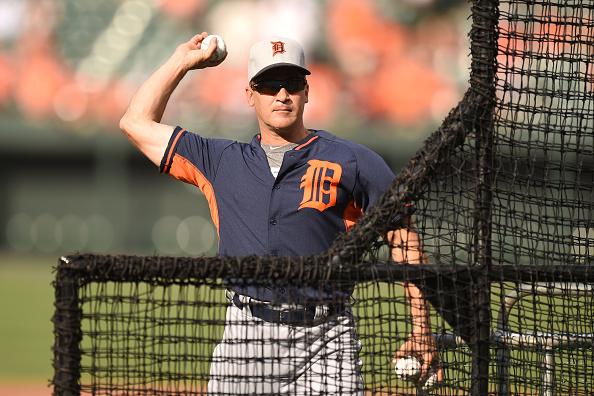 Former major league star Omar Vizquel was reportedly removed as manager of the Venezuela World Baseball Classic team earlier this week, in favor of another former big leaguer, Eddie Perez. And the team’s players are furious.

As MLive reports, Venezuelan players are even threatening to sit out the World Baseball Classic if Vizquel is not reinstated as the team’s manager:

One by one, the players appeared on a Venezuelan sports radio show Thursday night to defend Vizquel. Many threatened to drop out of the WBC unless Vizquel was reinstated.

Martinez, the first of several players to appear on the Los Cronistas radio show, said in Spanish that Vizquel had been treated with a lack of respect and that he wouldn’t participate in the WBC if Vizquel isn’t managing the team.

“All the players believe that Omar Vizquel is suited for this job,” he said.

Players told the radio show that Vizquel’s MLB supporters had gathered in Miami to discuss the situation.

“With the rumors that are circulating, we decided to hold this meeting,” said outfielder Geraldo Parro.

They seemed unified in their support of Vizquel.

“Vizquel is an idol to all of us,” said Chicago Cubs pitcher Hector Rondon.

#Tigers Victor Martinez: "I will not be at #WBC, if he (Vizquel) is not the Manager. I will not represent the hands who are behind this."

"We all respect and admire Omar Vizquel, without him we're not going to participate on WBC"
Eduardo Rodriguez LHP at @loscronistas

Then this big one, as Seattle Mariners star pitcher Felix Hernandez shared a photo and message on Instagram of himself with some of the other Venezuelan players (caption translated):

Together in the name of baseball, Venezuela, and our manager Omar Vizquel. The team is united, we do not participate in the World Classic without Vizquel .

So, why would Vizquel be removed as manager? He was an 11-time Gold Glove winner, a three-time All-Star, a potential future Hall of Famer, and is the Tigers’ first base coach (as well as their infield and baserunning coach). And the players clearly LOVE him. It just doesn’t add up.

Well, MLive reports that Vizquel did not see eye to eye with the team’s general manager — and another former major leaguer — Carlos Guillen:

Will Vizquel be reinstated? Will the Venezuelan players back out of the WBC if he isn’t? And what will be the reaction of everyone else involved with the process if the players — many being MLB stars — choose to boycott the event?

This is a very bizarre situation, and it will be interesting to see how it all unfolds.