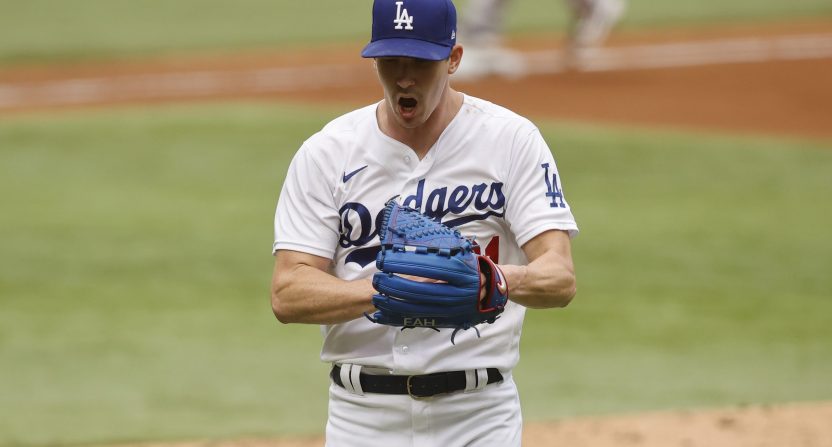 For the first time since 2004, there will be a Game 7 in each League Championship Series. The Los Angeles Dodgers put together a three-run first inning, and got outstanding pitching from Walker Buehler, in a 3-1 Game 6 victory over the Atlanta Braves. The Dodgers have evened up the series after multiple two-game deficits.

In the top of the first inning, the Dodgers got back-to-back dingers by Corey Seager (after he hit two homers in Game 5) and Justin Turner vs Braves ace Max Fried to take an early 2-0 lead.

Corey Seager stays scorching hot with a homer to to open the scoring in Game 6. pic.twitter.com/N96DrFcc7W

Justin Turner made it back-to-back jacks. 2-0 Dodgers in the 1st vs Max Fried. pic.twitter.com/0PbhRMREHK

The Dodgers added a run later in the inning on an RBI single by Cody Bellinger. And that was more than enough for Dodgers starting pitcher Walker Buehler to work with in this one.

Buehler threw six scoreless innings, with six strikeouts and no walks. In the bottom of the second, the Braves had the bases loaded with no outs after hitting three straight singles. But Buehler turned things up a notch, striking out two and getting an inning-ending groundball. On his second strikeout of the inning, Buehler got Atlanta’s Nick Markakis looking at a 100 mph fastball.

Dodgers SP Walker Buehler got out of a no-out, bases loaded 2nd inning to keep a 3-0 lead.

One of the outs came on a 100 mph fastball for a strikeout vs the Braves' Nick Markakis. pic.twitter.com/lPeYTfyA6S

He also got some help on defense, like on this remarkable grab by Mookie Betts at the right field wall.

Mookie Betts — maybe the best defensive outfielder on the planet — with an incredible catch. pic.twitter.com/L5I9EbQOId

And he caught a break when the Braves’ Ozzie Albies didn’t realize the Dodgers dropped the ball attempting a tag.

Just your totally normal out. pic.twitter.com/EERiK7kzPG

Immediately after Buehler left the game, the Braves scored a run off Dodgers reliever Blake Treinen in the seventh inning. But that was all the damage done against the Los Angeles bullpen, and Kenley Jansen only needed six pitches to throw a 1-2-3 ninth.

Kenley Jansen and the Dodgers close out a 3-1 win over the Braves, and we'll have a Game 7 in each LCS for the first time since 2004. pic.twitter.com/n7qXOu4uPZ

Game 7 — Sunday at 8:15 p.m. ET on FS1 — is expected to feature two rookie starting pitchers, in Atlanta’s Ian Anderson and Los Angeles’ Tony Gonsolin. Both right-handers have been fantastic this year, but then again they’ve never faced a situation like this. Expect each manager to have a quick hook if their starter struggles.