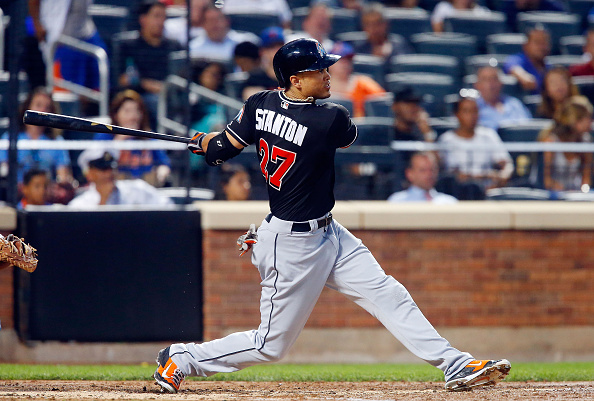 It’s been a tough season for Giancarlo Stanton. The Miami Marlins’ star outfielder has career-worst numbers across the board, entering play Tuesday night’s game against the New York Mets with a .218/.314/.437 slash line.

But as ESPN.Com’s Katie Strong detailed, Stanton is starting to swing the bat better of late, thanks in part to the help of Marlins hitting coach Barry Bonds (you may have heard of him):

During this time he leaned on someone within his own dugout for advice — Barry Bonds. Who better to ask than the all-time home run leader, in his inaugural stint as the Marlins hitting coach?

“He’s like a technician; he’ll get as technical as you can understand or as simple as you need,” Stanton told ESPN.com, laughing when asked which he preferred. “I’d say we grew together with that. Now, I want every last bit of knowledge — which he knows some may not understand — but I wanna be as far into it as I can.”

And on Tuesday night at Citi Field, Stanton might as well have held an “I’m back!” sign at home plate. The artist formerly known as Mike Stanton went 3-for-4 with two homers and five runs batted in, in a 5-2 Marlins win over the red-hot Mets.

His first homer was an absolute ROCKET line drive, with a 119.7 exit velocity according to ESPN Stats & Info. This is insane:

And he followed that up with a ridiculous moonshot three-run bomb:

So, yeah, I think this Giancarlo Stanton guy is going to be just fine.