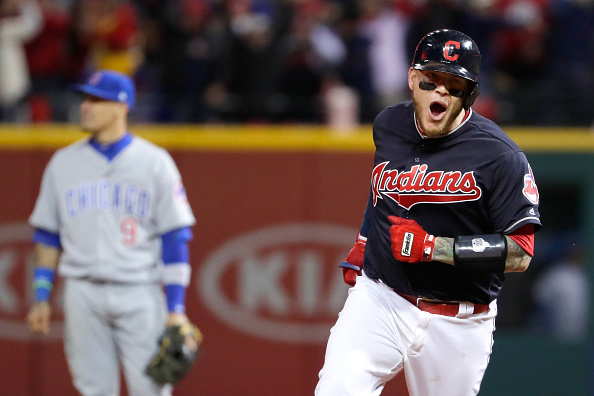 The Cleveland Indians got their quest to win their first World Series title since 1948 off to a great start Tuesday, beating the Chicago Cubs 6-0 at home in Game 1, and that came largely thanks to Roberto Perez.

Perez, who batted just .183 with three home runs in 184 plate appearances this season, was batting in the ninth slot and described as a “light-hitting catcher” by Joe Buck on the Fox broadcast,. That’s not inaccurate (especially from a batting average perspective) given his season. However, Perez provided much of Cleveland’s offense Tuesday night, hitting a solo home run off Chicago starter Jon Lester in the fourth inning and then a three-run shot off reliever Hector Rondon to extend the lead to 6-0 in the eighth. Here’s that latter home run:

Both of Perez’s home runs were impressive, with his solo shot tracked at an exit velocity of 112.9 miles per hour. That’s the hardest-hit home run in this year’s postseason, the hardest-hit ball Perez has recorded in the Statcast era, and the hardest-hit ball off of Lester all season. The three-run shot he hit in the eighth may have been even more important, though, as it all but sealed the game and doomed the Cubs’ chances of a comeback.

Perez hasn’t shown great hitting ability on a consistent basis during his three seasons in the big leagues so far, posting just a career regular-season average of .220. However, that’s in only 160 games and 505 plate appearances, and he has shown some potential at times, hitting .271 in his rookie season, posting an on-base percentage of .348 last year and hitting seven home runs that year as well. His postseason hasn’t been great, as he posted just a .174 batting average heading into this series, but he did have a home run in the ALDS against Boston. Now, he’s hit two more to tie the numbers he put up all season.

Perez is still valuable to the Indians from a defensive perspective even if he doesn’t hit, and he’s done an excellent job of managing Cleveland’s pitching staff (starter Corey Kluber had nine strikeouts in six-plus innings Tuesday), but he brought even more value with his bat in this game. We’ll see if he can keep that up, but at the very least, he added his name to the ranks of unlikely postseason heroes Tuesday. He also got Cleveland off to a tremendous World Series start.