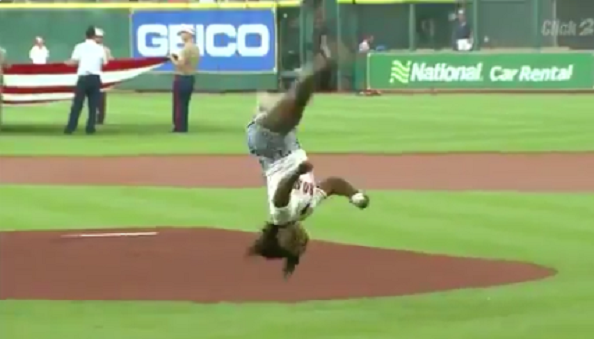 19-year-old gymnast Simone Biles is about to head to Rio to represent the United States in the Olympics, and her gymnastics style — as well as her bubbling personality — will make her a name you will be hearing much more of in the coming months.

Biles is from Houston, and she was asked to throw out the first pitch before the Astros’ fourth of July game against the Seattle Mariners at Minute Maid Park. Not only did she throw a strike, but she showed off her incredible gymnastics skills in the process.

Watch Biles do a front flip before throwing the pitch, all in very smooth fashion:

Check out Houston’s own @Simone_Biles throwing out the first pitch at the @astros game on July 4th! pic.twitter.com/NJS4H2Hipj