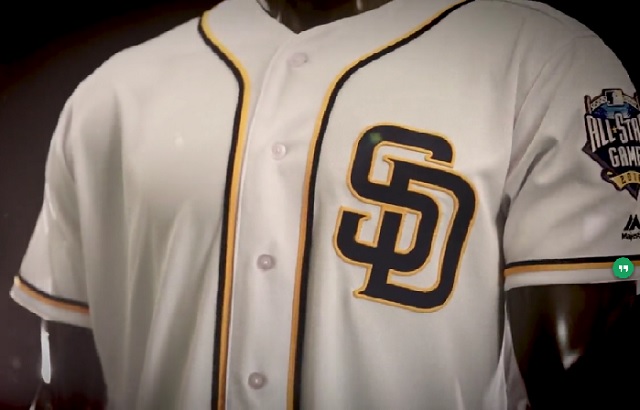 On Tuesday night, the San Diego Padres unveiled not one, but two new alternate uniforms to be worn during the 2016 MLB season along with a new home jersey commemorating the 2016 All-Star Game, which will be held at Petco Park in July.

First, to continue with their tradition of honoring the US military, the Padres will be wearing navy digital camo uniforms during every Sunday home game during the 2016 season.

But the Padres weren’t content with unveiling one new uniform on Tuesday. Later in the day at a social summit, the Padres revealed their new All-Star Game commemorative jersey, which will be their new home jersey.

A new home white jersey will be worn next year to commemorate the 2016 MLB All-Star Game in San Diego!https://t.co/3LKtGdlwlY

And then finally, just for the hell of it, the Padres revealed a new Friday home game jersey, with more yellow and brown than you can shake a stick at.

We’re not done yet!

For every Friday home game in 2016 the #Padres will wear a brown and yellow jersey!https://t.co/20HfWBhITn

And here are all three new uniforms in one tweet in case you have a short attention span.

The Padres have had an incredibly bland look for a decade, so any changes are welcomed. But it’s not as if the Padres reinvented the wheel here. They dumped the ridiculous “Padres” script that had been plastered across their jerseys since the 2004 season and will be wearing the “SD” logo that had been on their road jerseys in recent seasons, and on the bright side, they don’t look like pajamas like the road jerseys did.

The new alternate home jerseys are also going to be showing off “Padres” in a block format, much like the “San Diego” on the road jerseys over the past couple of seasons. It’s worth noting that these road jerseys will return for the 2016 season, as will the pajama-style navy uniforms as an alternate road jersey.

As for the camo… well, the Padres have been wearing some form of camo alternate jersey for the better part of two decades. Last year, this was their camo jersey of choice.

Even the damn names and numbers were difficult to see!

On the bright side, the brown-and-yellow is back in 2016 on a limited basis. Last year, the Padres rolled out their throwback brown pinstripe jerseys for five games, and they were pretty well-received by the team’s fanbase.

All in all, this series of uniform developments is encouraging for the Padres. Are their new uniforms perfect? No, not by a long shot. But for the first time in years, the Padres actually have something resembling an identity. Their uniforms are much less bland, boring, and monochromatic. Really, who ever thought navy blue and white was a great color scheme for a sports team not named the Yankees (or Cowboys, for that matter) in the year 2015?

I can even live with the camo. At least it’s a different color than the same camo uniform that every team rolls out when they want to adopt a new camo jersey. Now, if only the Padres did this a year ago when they went on their massive offseason rebuilding project. They could have moved *so many* Justin Upton brown-and-yellow jerseys.