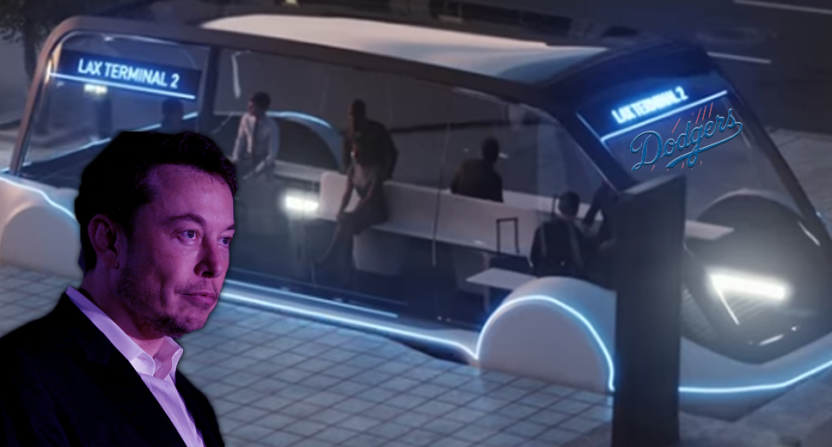 Ever notice that Elon Musk gets a whole lot of press for big ideas that never seem to actually happen? Nobody has proposed more people-moving tunnels, missions to other planets, and life-saving submarines that never actually seem to pan out than the founder of Tesla and SpaceX. And ever since his plans to save a group of kids in a Thailand cave were roundly criticized as a PR stunt that never would have worked, followed by him calling one of the actual heroes of the mission a pedophile because he criticised the plan, more people have been catching on to the whole game.

Of course, that doesn’t stop everyone from tripping all over themselves to write about whatever idea Musk floats out there next. It’s exactly what happened this week when he announced plans to build a privately funded tunnel from a subway station in East Hollywood to Dodger Stadium as a way to reduce traffic and speed up commute times for LA Dodgers fans. The Dugout Loop would start by taking 1,500 fans to and from each game and would eventually be able to take up to 2,800 fans, which adds up to five percent of Dodger Stadium’s capacity. Rides would cost $1 and would take just a few minutes in each direction.

BREAKING: @elonmusk’s @boringcompany will build a 3.6 mile tunnel from East Hollywood to Dodger Stadium that can carry 1,500 fans to the game in four minutes versus the more than an hour those fans spend traveling by car to the game today. pic.twitter.com/v9joUxbsrE

Everyone knows that LA is a traffic nightmare and that goes double for the area around Dodger Stadium when the team is playing. Solutions to cut down on the congestion are always welcome and people have been trying for years to figure out how to get it done. In theory, Musk’s plan makes sense. It has the backing of the city and the team, both of whom would love for someone else to not only do it but pay for it, as Musk and his company are proposing.

The problem is, of course, what everyone expects to happen…if this even does happen. 2,800 people is certainly a large amount, but is that enough to even make a real dent in Los Angeles gameday traffic? Los Angeles Mayor Eric Garcetti said in his statement that this project will “solve traffic issues to and from the stadium,” which seems like lofty expectations that can’t possibly be true. Not to say that it’s not the kind of public transit option people need to get to these games, but outweighed expectations are what always seem to doom Musk’s intentions and he already does a good job of overplaying the impact of his work anyway.

Good luck to Musk on following through on this one. It would be helpful for Dodger fans for sure, but it won’t be the cure-all that everyone is going to pretend it might be. And to be honest, we’ll believe it when we see it anyway, because just like so many other things Elon has proposed, chances are it won’t happen anyway.