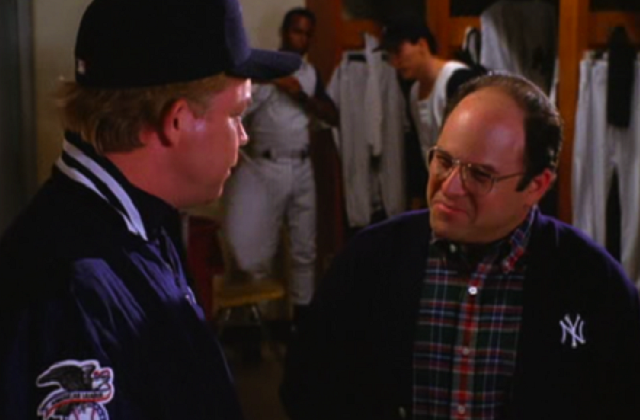 Full disclosure: I’m a Seinfeld freak. I can recite episodes verbatim and I usually don’t have any problem using a line from the show to describe something happening in my every day life. It’s a gift.

So as both a Seinfeld freak and a baseball freak, I’ve always enjoyed the episodes where the two intermingled. One episode is 1996’s “The Caddy” when George locks his keys in his car of the New York Yankees’ employee parking lot. Both George Steinbrenner and Mr. Wilhelm notice the car in the lot all day and night and think George is burning the midnight oil, being the first to arrive and the last to leave the office each day. Because of this, Wilhelm tells George he’s being considered to become the new Assistant General Manager of the Yankees.

Of course, it all goes to hell and George loses the promotion when he’s presumed dead (long story). But before he’s denied, George tells Steinbrenner, “I think I may have found a way for us to get Bonds and Griffey, and we wouldn’t have to give up that much.”

For years, I’ve always wondered: What, exactly, was George Costanza going to give the San Francisco Giants and Seattle Mariners to get Barry Bonds and Ken Griffey Jr.? Today, we try to answer that question.

The episode aired in the winter of 1996, so let’s say the 1995 season had just ended and teams were gearing up for ’96. The Yankees had just been eliminated from the ALDS by the Mariners, who would in turn lose the ALCS to the Cleveland Indians. The Giants had just finished in last place and appeared to be going nowhere fast. So the Yankees and Mariners were both strong teams, while the Giants were looking to fill a number of holes.

Let’s start with Bonds. George gives us a window into his thinking while talking to his fiance Susan when he tells her, “We trade Jim Leyritz and Bernie Williams for Barry Bonds, huh? Whaddya think? That way, you have Griffey and Bonds in the same outfield! Now you got a team!” Obviously George has already worked out the details of the Griffey trade, but we’re not privy to them. Instead, let’s focus on his proposed deal for Bonds.

Leyritz was a part-time catcher who put up a .269/.374/.394 line in 1995, an upgrade from the Giants’ light-hitting catcher Kirt Manwaring. So far, so good. Williams was a versatile outfielder just entering the prime of his career and would likely appeal to the Giants as a replacement for Bonds. Costanza was on to something.

Still, this was Barry Bonds and the Giants would’ve needed more to trade away their superstar. Robby Thompson was at the end of his career and there was no one in the system to replace him, so perhaps GM Bob Quinn would’ve asked for top infield prospect Andy Fox to be included in the deal. And since pitching is always at a premium, Quinn would probably ask for can’t-miss prospect Matt Drews, the former No. 13 overall pick who had just finished destroying A-ball. That may have sealed the deal.

So to recap: it could’ve been Barry Bonds to the Yankees for Jim Leyritz, Bernie Williams, Andy Fox, and Matt Drews. Quite a haul for the Giants, but there’s no doubt that Asst. GM Costanza wins this trade. It’s a bigger blowout than when he beat Lloyd Braun at selling computers.

Now, Griffey would be a little tougher since the Mariners fully expected to contend again in ’96 and the Yankees were a playoff team, too. That didn’t stop the two teams from making a deal that offseason though, as the Mariners would send Tino Martinez, Jim Mecir and Jeff Nelson to the Yankees for Russ Davis and Sterling Hitchcock. So knowing both teams were willing to deal, let’s build off of that move.

In order to get the Mariners to include Griffey, the Yankees would have to send back the cream of their minor league crop. That means highly-touted outfield prospect Ruben Rivera would’ve headed to the Pacific Northwest, giving the Mariners their Griffey replacement and a player they could build a team around. Seattle probably would’ve liked another young, premiere outfield prospect go to with Rivera, so perhaps Ricky Ledee is included in the deal as well. Surely dealing two of the top, can’t-miss, blue-chip prospects in baseball would be enough to pry Griffey from the Mariners and Costanza gets the other piece of his grand offseason plan.

So Assistant General Manager George Costanza has added Barry Bonds, Ken Griffey Jr., Tino Martinez, Jim Mecir, and Jeff Nelson for Jim Leyritz, Bernie Williams, Andy Fox, Matt Drews, Russ Davis, Sterling Hitchcock, Ruben Rivera, and Ricky Ledee. Not a bad haul, and like he’d predicted, he didn’t give up that much. He may have gutted the minor league system, but he added enough pieces to make the Yankees clear favorites heading into 1996. Just look at this lineup:

That is one scary lineup. And try to imagine the ramifications. The Yankees win the World Series, and because of his shrewd mind Costanza replaces Gene Michael as General Manager. George’s status as a perceived communist opens up a talent pipeline from Cuba and the Yankees get first crack at the best and brightest Cuban talent before any other team. George works closely with Majestic Athletic to create a new cotton uniform that doesn’t shrink. Yankee Stadium opens the first ballpark calzone stand in North America. George fleeces Neal Huntington in a trade and says he’s “out-Nealed him.” Bathroom stall doors at the stadium go all the way to the floor.

What a run. By the time George is traded to Tyler Chicken in Arkansas for chicken dogs, chicken twists, and some kind of fermented chicken drink, the Yankees have probably won multiple World Series championships. All because George locked his keys in his car.

If only Sue Ellen Mischke hadn’t been walking around town in just her bra, and Kramer and Jerry hadn’t crashed George’s car and made the Yankees think George was dead… if only.