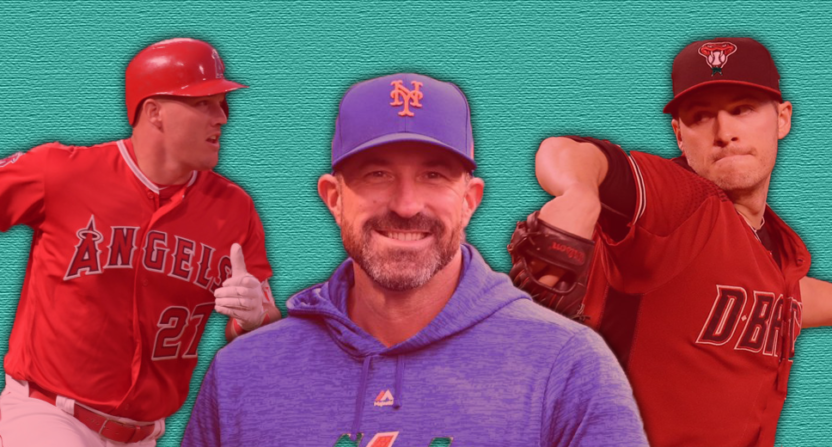 Baseball season is three weeks old, and although not enough time has passed to allow sweeping judgements about slumping or surging teams and players, it is enough time that we can slightly adjust our preseason picks based on what we’ve seen.

With that in mind, we asked our writers which teams’ outlooks had changed most dramatically, for better or for worse, since the start of the season. Here are their answers:

Matt Clapp: To me, it’s the New York Mets. I wrote about their substantial playoff chances’ increase after 12 games, and despite a brutal blown game to the Nationals (the team they’re mainly concerned about), they still have to be feeling great about things through 17 games.

The Mets are 13-4, good for the best record in the National League and second-best record in baseball. They have a three-game lead in the NL East, but for all intents and purposes, it’s a five-game lead; that’s their current lead over the Nats.

Now, for the Mets, it’s likely all about health. We knew they had a solid roster on paper, but didn’t know if Noah Syndergaard and company could stay relatively healthy over a 162-game schedule. And we still don’t know.

But so far, so good for the Mets, and banking 13 wins already is a pretty big deal. It will be very difficult to stay on top of the Nats all season long, but they’re at least looking like one of the Wild Card favorites at this point.

Joe Lucia: To me, the Mets seem like the obvious option. A month ago, I thought they would be one of the three or so teams contending for the second NL wild-card spot. Heading into play on Wednesday, they’re tied for the best record in the National League despite getting nothing from half of their lineup. Maybe the Mets are… actually good?

Andrew Bucholtz: I think the most notable outlook change so far comes from the Giants. Despite last year’s utter horror (64-98, their worst mark in 32 years), there was a fair bit of optimism heading into this year after moves to grab Evan Longoria and Andrew McCutchen, and I even picked them as a wild-card team.

Wednesday’s 4-3 extra-innings win over the division-leading Diamondbacks was a step in the right direction, but there were still plenty of issues visible during it, and it merely improved the Giants to 7-10. Another weak spot for them has been the bullpen, which looked particularly vulnerable Wednesday, surrendering a ninth-inning lead and then almost blowing a two-run lead in the tenth (one run scored and the bases were then loaded before Chris Gearrin got light-hitting Arizona catcher Alex Avila to ground out).

It’s early, and maybe they can still turn it around and make a run, but at this point in the season, they’re not looking like they’ll be even close to postseason contention. And the discussions about them as possible trade-deadline sellers (with perhaps even Bumgarner on the block) are heating up.

A month ago, the Diamondbacks looked like a strong wild-card contender. Now, they look like that and more.

Ian Casselberry: This is a bit of a homer pick, but the Detroit Tigers with a 6-9 record at this point is a surprise. I (and likely many others) thought they would be so much worse! Yet both the White Sox and Royals are behind them in the AL Central standings. Sure, the Tigers could eventually find their level and sink to the depths projected for them this year (especially if Miguel Cabrera keeps hitting .255).

But going into the season, I thought Detroit might be better than expected because of their starting pitching. And so far, that’s been the case — other than Jordan Zimmermann, who continues to look like an awful signing for general manager Al Avila. Even with Zimmermann’s struggles and a bullpen that’s been typically bad when it matters most, Tigers pitching ranks fifth in the AL with a 4.27 ERA and .744 opponents’ OPS.

Mikie Mahtook, one of the players Avila touted during the offseason, has already been demoted for hitting poorly, which indicates just how poorly he was playing. But it also might mean that Avila and manager Ron Gardenhire might think someone is better. Is that a sign of hope? An indication that 2018 won’t be the total tank job that it should be? No, it’s still early. Once the Tigers stop getting games postponed due to weather, they’ll likely show how bad they really are. But maybe they’ll be closer to .500 than anyone would’ve guessed.