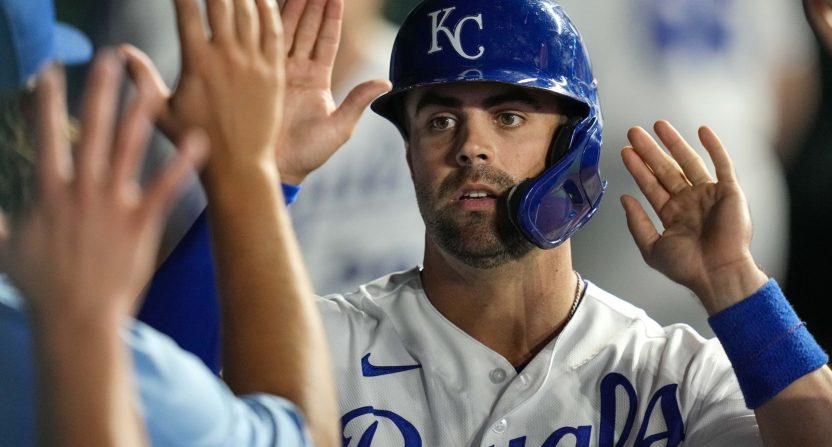 One of the biggest topics in baseball is the large number of major league players that have remained unvaccinated against COVID-19, in the middle of the second season since fans came back to the stands.

Kansas City Royals‘ second baseman Whit Merrifield previously held a streak of 553 consecutive games. But that ended earlier this week after he, as well as teammates Andrew Benintendi, Michael Taylor, and Hunter Dozier, were revealed as a few of 10 Royals players ineligible due to play in Toronto due to Canada’s vaccine mandate.

During a conversation with reporters, Merrifield explained his reasoning for his anti-vax stance. He cited how other players who did receive the jab got “pretty sick,” and said they spread COVID-19 to others in the clubhouse and even brought it home to their families. However, as baffling as that statement may be, the one quote that drew the most headlines was when the All-Star slugger suggested that he would take the vaccine — if his team has a shot to play in Canada during the postseason.

“That might change down the road,” said Merrifield, who has led the American League in steals three of the last five seasons. “Something happens and I happen to get on a team that has a chance to go play in Canada in the postseason, maybe that changes. But as we sit here right now, I’m comfortable in my decision.”

"i would get the vaccine for a playoff team" is the funniest thing i've heard an antivax player say https://t.co/oYA2hw2Dyv

Whether you believe in Merrifield’s vaccine stance or not, the Royals are currently 11.5 games back from the American League Wild Card chase and have little chance of playing the Blue Jays or any other team in the postseason.

If we look at a contender like the New York Yankees, many players were reluctant to get the vaccine at first, but due to their annual three-series bouts in Toronto during the regular season and the high likelihood of the Yanks playing the Blue Jays again in the postseason, everyone on the team decided to take the jab. The Astros are also the other fully vaccinated team in the AL.

Merrifield’s name is always tossed around during hot stove and trade talk conversations. But his stance on the vaccine is definitely going to raise a red flag for any team that wants to pursue him as we near the August trade deadline.

If a team does seek to bring Merrifield into their clubhouse, they will be getting a two-time All-Star who has plus speed and has played practically every position on the diamond outside of catcher and shortstop. But they’ll be getting someone who wouldn’t be available for any series in Toronto.

Update: Royals president of baseball operations Dayton Moore addressed this Thursday night on The Program With Soren Petro on Kansas City radio station 810 WHB , and said Merrifield was “sorry” for his remarks:

“It’s very difficult at times to articulate feelings and emotions. Sometimes, it just comes out wrong. When I first heard that, I was very disappointed. Pretty disgusted, truthfully. But I also know that’s not who Whit is. And as I communicated with Whit about that, he made it very clear he was sorry for how that came out. I have to accept that and move on. I’m not going to kick him when he’s down, because I do know what Whit Merrifield has meant to our team, the great work he does in this community and I just think it was a very poor choice of words.

“He’ll learn from that and we all will. It’s unfortunate, but we’ve gotta try to move on from it . Whit will get an opportunity to discuss that statement at some point in time.”