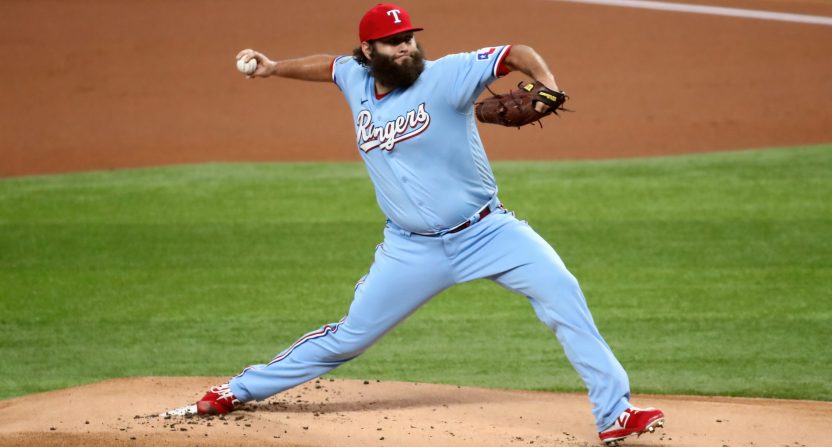 The Chicago White Sox have been determined to add a good starting pitcher for a long while, and they reportedly did so late on Monday night by acquiring Lance Lynn from the Texas Rangers. Several MLB insiders are reporting that Lynn has been traded for pitcher Dane Dunning and a pitching prospect, who The Athletic’s Ken Rosenthal reports is left-hander Avery Weems.

Lynn to White Sox for Dunning and a prospect is pending an exchange of medical records, as is standard procedure in such situations.

Left-hander Avery Weems is the other prospect the White Sox are trading for Lance Lynn with righty Dane Dunning, source tells The Athletic. Weems, 23, was the White Sox’s sixth-round pick out of the University of Arizona in 2019.

The right-hander led all MLB pitchers with 84 innings pitched in 2020, and put together a 3.32 ERA and 4.19 FIP. In 2019, he he had a 3.67 ERA and 3.13 FIP over 208 1/3 innings pitched, and was worth 7.5 wins above replacement (WAR) per Baseball Reference and 6.8 WAR per FanGraphs. Over the last two seasons, only Jacob deGrom has been worth more WAR for pitchers per Baseball Reference (and only deGrom, Shane Bieber, and Max Scherzer have been worth more WAR per FanGraphs).

So, over the last two seasons, Lynn has truly pitched like an ace. And now he joins 26-year-old ace Lucas Giolito — who tossed a no-hitter in August — and veteran southpaw Dallas Keuchel — who had a 1.99 ERA over 63 1/3 innings in 2020 — to lead the Chicago starting rotation.

As I said this morning on @MLBNetwork, execs I have spoken to view Lance Lynn as a solid No. 2-3 starter who they would feel confident handing the ball to in a playoff series. The White Sox now have Giolito/Keuchel/Lynn atop their rotation. Solid move.

Add that to the extremely talented group of position players the White Sox have (Chicago led all teams in position-player WAR in 2020, according to FanGraphs), and they should be a very dangerous team.

Oh, and Michael Kopech is back throwing and reportedly looks very good.

The trade makes plenty of sense for the Rangers. They had the AL’s worst record in 2020 at 22-38, and there’s no reason to think they can contend in 2021. Lynn’s trade value won’t get any higher, both due to how stunningly well he’s pitched over the last two seasons, and because he’s on the final year of his deal.

In Dunning, Texas gets a young pitcher (he turns 26 on Dec. 20) who showed in his rookie 2020 season that he can a productive major-league starter. The 6’4″, 200-pound right-hander has a four-pitch mix, which he used to put together a rock-solid 3.97 ERA and 3.99 FIP over seven starts in 2020. To get several years of control of an MLB-ready starting pitcher that was very productive in his rookie season, in exchange for one year of Lynn, is a really nice return for the Rangers.

Sox needed a little more veteran quality to their rotation and Lynn at 1yr/$8M is a great fit.

Six years of 25-year-old Dunning is a steep price, as he looks like a solid #4 starter that could be even more, but his value had also spiked with a solid MLB debut in 2020. https://t.co/ewhfXY4oKA

Dane Dunning is a great pull for one year of Lance Lynn. There’s some command question on Dunning (92 Command+ and too many middle middle sinkers), but the velo and the slider combo is very good and the curve and change have shown good promise.

So, the Rangers did well in this trade, but the main takeaway from the deal is of course the White Sox adding another ace-esque arm to their rotation. The White Sox made “the jump” in 2020 with a 35-25 record, after winning 72 games in 2019. Don’t be surprised if they make another leap into very legitimate title contention in 2021.