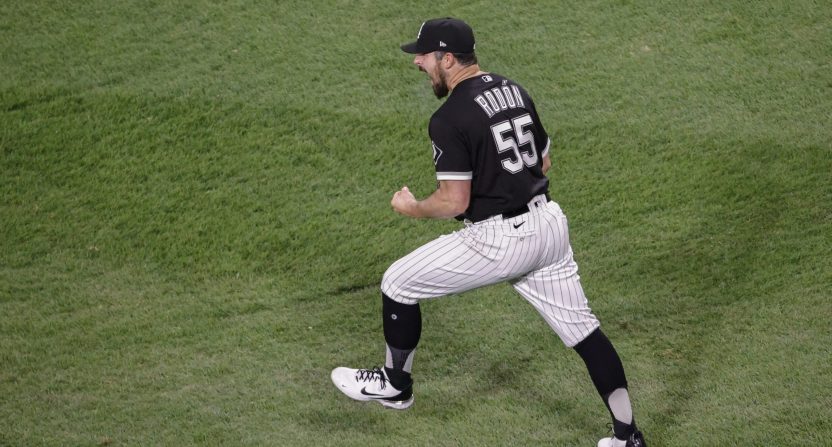 Chicago White Sox pitcher Carlos Rodón threw a no-hitter on Wednesday night against the Cleveland Indians, and was oh so close to a perfect game.

Now, he did catch two breaks in the inning. He almost lost both the perfect game and no-hitter to start the inning, when Josh Naylor hit a dribbler that almost turned into an infield single, but Jose Abreu tagged first base in sliding fashion for the out.

And for the second out, Rodón got an extremely generous (bad) strike three call from home plate umpire Doug Eddings.

Carlos Rodón did get the benefit of the doubt on this questionable call for the second out in the ninth. pic.twitter.com/opN6CcohrM

But in between those plate appearances, Rodón lost the perfect game in a very frustrating way. The left-hander was trying to get a chase on 0-2, but instead his breaking ball clipped the back foot of Cleveland’s Roberto Pérez for a hit-by-pitch.

Carlos Rodón loses the perfect game on a breaking ball hit-by-pitch with one out in the ninth. Pretty lame way to lose it. pic.twitter.com/oJMpd8iXwy

So, he lost the perfect game, but he was able to finish off the no-hitter on this Jordan Luplow groundout to first:

if you, like me, felt like the White Sox were prolific with no-hitters, you were right. With 20, they are second in MLB history behind the Dodgers (26)

There hasn’t been a perfect game since 2012, when Felix Hernández threw one for the Seattle Mariners, and Rodón becomes the seventh pitcher to lose a perfect game in the ninth inning since then.

Pérez told the media that he didn’t even know Rodón had a perfect game before the hit-by-pitch.