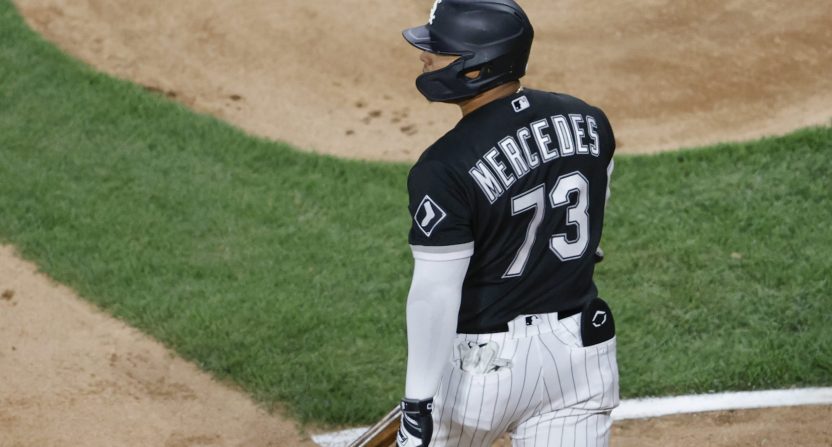 Chicago White Sox rookie Yermín Mercedes was as big of a story as anybody in baseball for the first month of the 2021 MLB season. The 28-year-old started the season 8-for-8 at the plate, and crushed some mammoth homers. But after an incredible April (1.113 OPS), Mercedes struggled in May (.619) and June (.411). He was also called out by White Sox manager Tony La Russa in May for swinging on a 3-0 count to hit a home run in a blowout game. And on July 2, he was sent down to Triple-A Charlotte, where he’s remained since.

Well, just a few months after performing incredibly in the majors as a rookie, Mercedes wrote in an Instagram post on Wednesday night that he’s walking away from baseball “for a while.” The Instagram post featured a graphic simply saying, “it’s over.”

Mercedes made the post after being pinch-hit for in the sixth inning of Charlotte’s game on Wednesday night.

The White Sox claim they haven’t received any official word from Mercedes on his plans.

White Sox say they are aware of Yermín Mercedes’ instagram post, but at this point have not recieved any official notice from Mercedes of his future plans, and that he’s still part of the active roster at Class AAA Charlotte.

So, we may not know for a while if this is a full-on official retirement, and perhaps Mercedes is just frustrated about La Russa, his recent demotion, and/or something else altogether. But for now, he certainly appears to be walking away from the game.

This is a stunning development after Mercedes was one of the most amazing stories in baseball just a few months ago, and again, as a rookie.

Update: La Russa said that he intends to explain to Mercedes that the slugger “has a big league future.”

La Russa on Mercedes: "I understand you’re in Triple-A, away from big leagues you can get emotional. Don’t know more than that. Will reach out to him. Could be just a little frustrated. I’ll try to explain to him that he has a big league future."