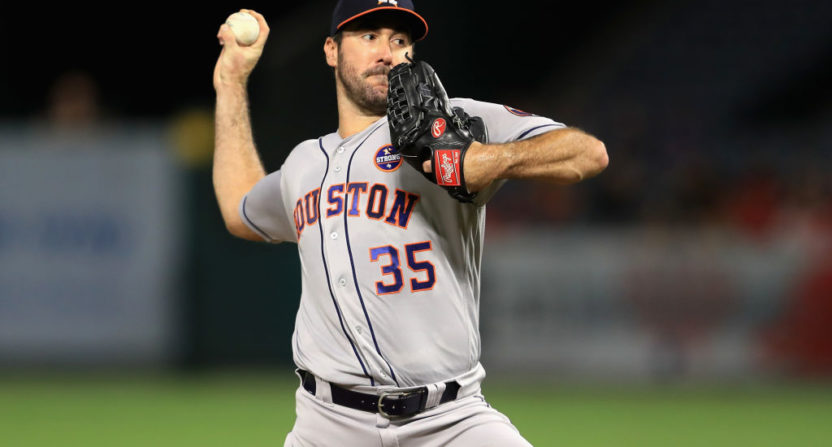 Welcome to The Comeback’s Major League Baseball playoff preview series, in which we tell you why each of the teams headed for the postseason has a chance to win it all. On Monday, we wrote about Clayton Kershaw and the Los Angeles Dodgers. Today, the AL West-champion Houston Astros.

The Houston Astros tore through the American League like a hot knife through butter in the first half of 2017, going 60-29 and opening up a 16.5-game lead in the AL West by the All-Star Break. But the team came back to Earth in the second half, playing just above .500 ball while the Cleveland Indians became the chic team in the American League.

With that being said, the Astros have a good shot at winning the World Series. Houston’s acquisition of Justin Verlander last month has helped bolster a rotation that dealt with injuries and inconsistencies all year, turning it into a force that could result in Lance McCullers becoming a late-inning weapon. Not that Houston needs any more late inning weapons, though — Chris Devenski, Ken Giles, and Will Harris have been as dominant a late game trio as any bullpen in the game.

Offensively, the Astros lineup is fearsome, especially now that Carlos Correa is back in the fold after missing six weeks with a thumb injury over the summer (when, perhaps not coincidentally, Houston struggled for the only time this season). Nine Astros with at least 250 plate appearances have a wRC+ above 110, which is why they have by far the best offense in baseball with a 119 wRC+, a .347 wOBA, and 227 home runs.

And in case you’re curious about whether or not the team’s offense is too “boom or bust,” Houston has baseball’s lowest strikeout rate and the league’s lowest whiff rate. They’re not going for broke every time at the plate, they’re just a team of damn good hitters.

If there is one crack in the Astros’ armor, it’s the team’s defense. Houston is one of the worst fielding teams in baseball. The only two players that grade out as above average defensively by both UZR and DRS are Josh Reddick and George Springer (when he’s in center field, not right). The rest of the Astros’ regulars grade out as average or worse in one or both of those categories, a list led by Springer in right (-7 DRS, -11.8 UZR/150), Yuli Gurriel at first (-5, -8.1), and Alex Bregman at third (-3, -5.4).

Cumulatively, the Astros rank 20th in baseball in DRS (-13, worst of any playoff team aside from the Nationals) and 27th in UZR/150 (-3.5). They’re not a good defensive squad, and in the playoffs, good defense is invaluable—look at last year’s Cubs team, which won the World Series as far and away baseball’s best team.

That said, with a top-tier ace in Verlander alongside Dallas Keuchel, a dominant bullpen, and an explosive offense, the Astros have everything that a potential World Series champion needs.